Friday
We were expecting the part for the water maker to arrive today.  We had to be off of the mooring ball by 11:00, maybe an extra hour.  Dave had a message that it was on a truck in town and would get a text once it was delivered.  I headed to the marina about 9:00 with our laundry.  Then I would pick up the part, and we would be on our way.  At 11:00, the part hadn’t been delivered.  I talked to the harbormaster to ask for an extension of an hour.  Then if the part wasn’t there, we’d pay for another night.  He said to go ahead and stay until 1:00.  About 12:30, it wasn’t there.  I headed back to the boat.  We moved the boat north of the mooring field and anchored.  We had lunch and tried to come up with a new plan.  After lunch, Dave checked his e-mails and found one saying the part was delivered, no text.  So he took the dinghy in to pick it up and we were on our way by 2:45. 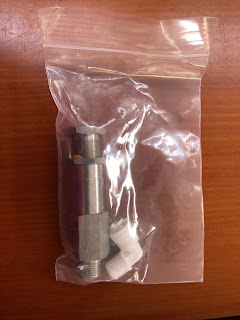 We headed offshore to go to Canaveral.  Just south of St Augustine is a shallow area on the ICW.  We would have wanted to go through there at high tide, or at least a rising tide.  If we got stuck, the tide would lift us off.  The high tides right now were about 6am and 6pm.  Going offshore looked like a better option.  We figured it would take us about 20 hours to get to the Canaveral canal.  We wanted to arrive in the daylight, so everything should work out.

We knew the wind was going to be on our nose, and it was.  So we motored all the way to Canaveral.  The weather was going to be worse on Saturday, so we didn’t want to wait any longer.  Dave took a nap from 5:30 to 7:30pm.  When he woke up, we had a soup dinner together. Then I headed to bed.  Dave stood watch and I slept until about 3:00am Saturday.

Saturday
I stood watch from about 3:30 to 7:30am while Dave slept.  We had to round the Hetzel Shoals on the outside of the bump in the shoreline near Canaveral.  Once we rounded that and turned west, we had waves hitting us on the side, which made the ride a little rough.  It as time for Dave to get up anyway.  We were entering the Port Canaveral inlet for the first time.  There were cruise ships, Navy ships, commercial fishing boats and weekend fisherman.  This was our first time though this inlet.  We were going to go through a lock for the first time.  Dave got out fenders and 2 lines that each had to be 75ft long.  We had to request a bridge opening right before the lock which went smooth.  Then we had to call the lock tender.  Another boat was just coming out of the lock from the west, heading east.  So that was good timing, too.  About 9:00 we entered the lock and tied up.  One other boat joined us.  We only waited about 10-15 minutes for the water to raise (or lower, I didn’t really notice which), and we were on our way west.  It was a good first lock experience. 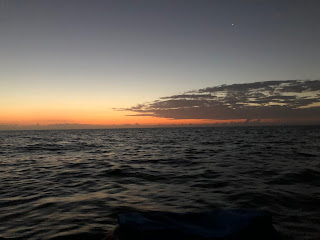 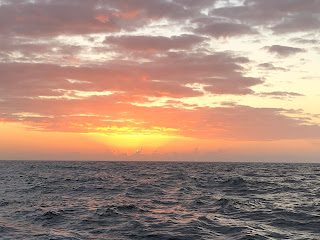 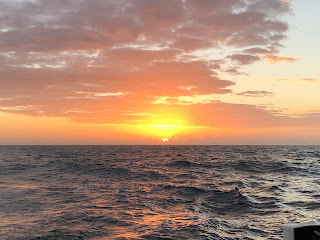 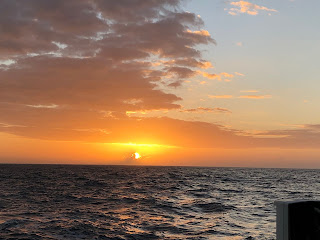 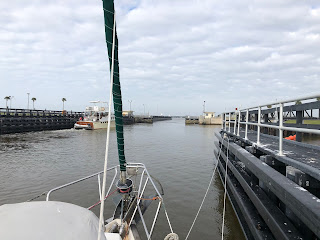 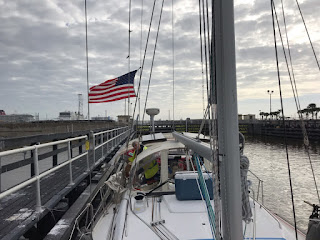 We have a cousin, Doug and Elaine Dwyer, that moved to Cocoa, FL a couple years ago, actually not far from the Port Canaveral canal.  We have been telling him for a couple years that we would stop and visit him when we travel south.  We contacted him a few days ago to see if he would be home and able to meet with us.  We found out that a brother of his that lives in Oklahoma, Gary and Lindy Dwyer, was visiting for the weekend.  To get together, we had to figure out a place that we could dinghy to shore.  Most of the shoreline is private property.  The boat ramps don’t want you to leave your dinghy tied up.  I found a restaurant with a boat dock just south of where Doug lived.  We were able to meet there for a late lunch and visit for awhile.  It was great that the timing worked out. and so fun to visit again.  Doug’s job is trouble shooting the software used in the missile launches.  Pretty cool.  He tells everyone he is a “rocket scientist”.
We went back to the boat, watched a movie and went to bed early.  Last night’s sleep was king of chunky with overnight watches.
Posted by svluckofafool at 7:38 PM