Sunday
I made a “one week only” performance at the Brunswick Catholic Church in the choir.  It was nice to see my “church family” again.

After church, Dave and I headed to Jekyll Island to celebrate our 41st wedding anniversary.  We spent 3 nights there last year for our 40th.  We liked it so much we went back for one night this year.  First we headed towards the beach and had lunch at the Beach House restaurant followed by a walk on the beach.

After checking into the hotel, we enjoyed sitting on the porch in their rocking chairs on a nice afternoon.  After dark, we walked around the property looking at their fantastic Christmas lights.  We walked to the Wharf for dinner, then back to the hotel.  This is such a beautiful property on a beautiful island. 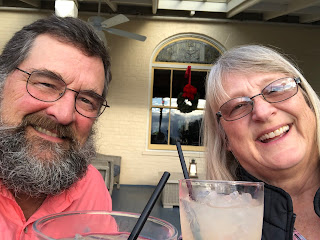 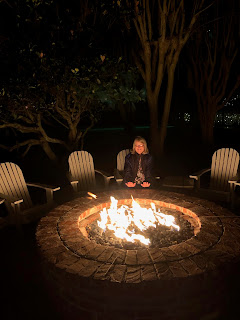 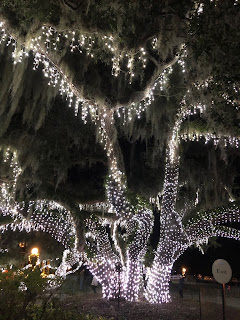 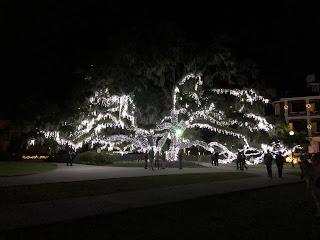 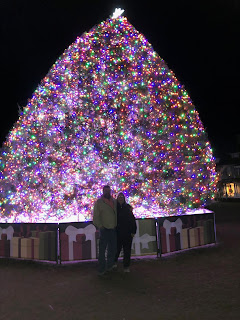 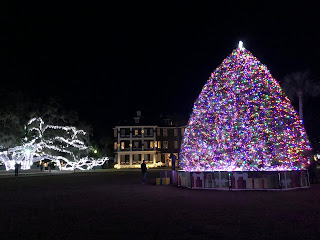 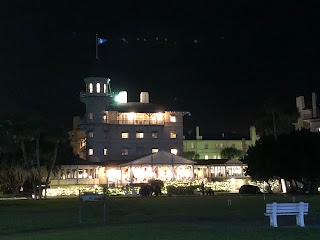 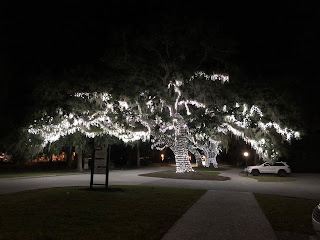 Monday
Today was actually our 41st wedding anniversary.  We had breakfast in the grand dining room at the Jekyll Island Club.  We didn’t plan to have dinner there last night because they have a dress code of coat and tie.  But we found out they have relaxed their dress code to pants and a collared shirt.  Good to know for future plans.  The hostess remembered us from last year, or was good at faking it and making us feel welcome.

Back the boat, I started packing for my trip to SD and making lists.  There isn’t room to have a suitcase laying about, so the packing actually happens the day before you leave.  I had a dermatology annual exam today, too.  That’s why we went to Jekyll Island a day early.

Dave worked on changing the windlass.  He had received the boards he ordered to place under the windlass.  He had to print a pattern in 3 sections to put together to plan where to drill holes in the new boards for mounting the windlass.  He had them all taped together and about to start when he decided to call the company one more time.  They gave him a couple things to check and he came to the realization that we were given a 5/16 gypsy instead of a 3/8 inch to match our chain.  When we needed a windlass last year, there was “only one in the United States” at the time and we didn’t want to wait for one to be sent from Europe.  The package we received had been opened and taped shut.  Everything looked ok, so Dave installed the windlass and gypsy and we took off for the summer.  Dave thought it had never worked right and maybe it needed a break in period.  So now he is going to have a chat with West Marine.

While making dinner tonight, our propane ran out.  We thought we went through that tank kind of fast.   As Dave tried to hook up the other tank, he realized there was a leak and a part had to be replaced.  So, everything went in the refrigerator and we went out for dinner.  After all, it was our anniversary.  We drove to our favorite restaurant on St Simon’s Island, Iguana’s.  They have the best grouper and shrimp in a combo meal.  AND they have free soft serve ice cream with toppings that you help yourself to with every dinner order.

Tuesday
We still didn’t have propane this morning, so we went to Maggie’s for breakfast.  Maggie is such a sweetheart and the food is good.

Dave took our propane tank to be refilled and get a new part.   There was a plastic fitting where the hose is tightened that cracked.  He was told not to be superman when tightening the hoses in the future.

Dave spent some time at West Marine discussing our problem with the windlass and gypsy.  They decided to order a new gypsy and replace it for us.  Dave already had the part number for them.

Once our propane was up and running, I made banana bread for Dave to enjoy while I was gone.  Now that we were in the habit of eating out, we went to Fox’s Pizza for dinner.  Now I only need to go to the authentic Mexican restaurant when I get back to make the tour of all my favorite restaurants complete.
Posted by svluckofafool at 1:54 PM