We had to move our rental car by 8:00 or feed the meter $2.50 per hour.  I forgot my phone, so Dave went back to the boat.  I was able to wait at the car without moving it, watching for the “meter maid”.  I had to laugh when I saw a guy come out of the hotel we were parked by and use a credit card for two of the cars.  Then a guy in shorts and flip flops shows up with a bag full of quarters and starts feeding the meter.  Life in a tourist town.

We went to the Maple Street Biscuit company for breakfast that was suggested by Schneiders.  There was a counter to put in your order.  As we were in line, we heard them asking the customers to name something that makes you smile, instead of giving them your name.  We’re hearing “sunshine” and “my mom”.  Well, that’s just too frilly for Dave.  He says “shotguns”before I can say anything.  So as we’re hearing them call out the orders, I start to worry that we are going to cause a panic.  Everyone is going to hit the floor or run out the door when they yell “shotguns”.  They actually said “order for shotguns”.  I timed it with filling my coffee cup at the self serve counter, so I wouldn’t have to pick up our food.  We heard someone say “did they just say shotguns?”.  Never a dull moment with Dave.

We have to wait until this afternoon for the mail to arrive before we head to Green Cove Springs.  Dave wanted to work on the water maker again, so Colleen and I planned a “play date”.  We picked her up at their  campground, about 20 minutes by car.  We came back to St Augustine to tour the Fort.  Dave, being a disabled Vet, can get in free and bring 3 people with him.  So he took us in, then walked to the boat.  We have both toured it before, but I had fun seeing it again with Colleen.  Most interesting fact:  St Augustine is the oldest permanent European settlement in the continental US.  It’s because of this fort.  Whenever the city was under attack, the villagers would go into the fort for protection.  There were 8 wooden structures on this site starting in 1565.  The Castillo de San Marcos was built in between 1672 and 1695.
Since we had a car, I wanted to have lunch somewhere further away than walking distance.  Colleen and I drove out to Anastasia Island, the land mass between the ocean and the ICW and the city of St Augustine.  We found a fun beach restaurant called Beachcomber’s. 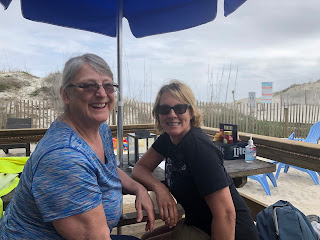 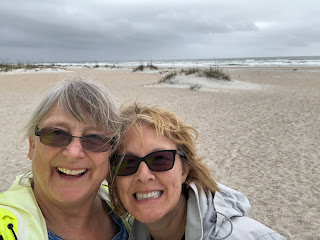 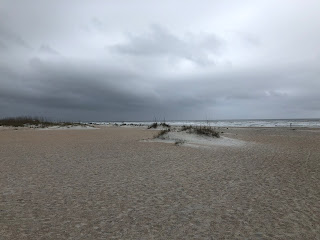 After lunch, I took her back to her campground and picked up Dave.  We then headed to Green Cove Springs to pick up our mail.  They only received one of the prescriptions we needed.  We headed back in time to return the car before they closed at 6:00, but not in time for their driver to run us to the marina and back before 6:00.  So they let us keep the car overnight.  BUT, there is the parking issue again.

We were able to park in the same spot, right across the road from the marina.  Dave felt like having soup, so we went to Harry’s on the waterfront.   Louisiana style restaurant with the best she crab soup.

Dave spent the day working on the water maker again.  He and the company figured out he needed a new pressure relief valve.  That was the wrong part they sent him not too long ago.  He actually had it in his hand and sent it back.  The company hadn’t even credited us yet, so they’ll send it to St Augustine.  It won’t be here until Friday, so I guess we’ll be her a couple more days.
Posted by svluckofafool at 7:26 PM