Wednesday
We had to have the car back when Enterprise opened at 7:30am.  I volunteered for the job.  But, we forgot to get gas last night.  They had donuts at the gas station, so I bought some for the people at Enterprise (and ok, a couple for us).  I told them I would rather spend the money on food for them than a taxi back to the marina last night.
Once I was back at the boat, Schneider’s said they were riding their bikes into town and wondered if we wanted to meet for breakfast.  We had to wait for the pump out boat to come to our boat at 9:00.  They have a hose that goes into a hole on our deck (normally capped) that uses a vacuum to empty our holding tanks.  Neither one worked.  They figured our vents were clogged.  When we have pumped overboard out at sea, there has been a strange airflow afterwards. It was probably because of the clogged vent.  Dave will work on that and have them return tThat’s a job for after breakfast.We met at Georgie’s Diner, a recommendation from another boater.  It was great.  We walked back to the marina together and went our separate ways.

It seemed like I had been going someplace nonstop since we got here Saturday.  So it was nice to have some time to get organized again. I realized my vegetables needed a little attention.  I spent some time cleaning up the galley and cooked dinner on the boat for the first time in 5 days.
Dave used the shop vac to open the holding tank vents.  He had to pull things apart to get at them under the walls in the heads.  He even left one torn apart until it would be checked the next day.  He fixed the latch on our freezer that broke just a few days ago.

I was working on the computer when I looked up and saw Dave with his head inside his t-shirt.  He was working on the nav lights for our dinghy, the red and green ones at the bow.  The one we currently had on the dinghy had a bad rubber seal that was no longer water tight.  He pulled out our spare nav lights and put lithium batteries in it,  He thought he could see a faint light, even with the switch in the off position, but maybe it was just sunlight reflecting off of it.  He needed it to be dark to check it out, hence working under his t-shirt.  He’s so creative, but makes me laugh in the process.  He took it apart, used his meter, and still couldn’t figure out why it was staying lit.  It might be in the switch itself.  He ended up taking parts off of the new one, fixing the old one, and threw away the rest. He didn’t think we needed to buy replacement nav lights at this time.  No one uses them in the Bahamas anyway. 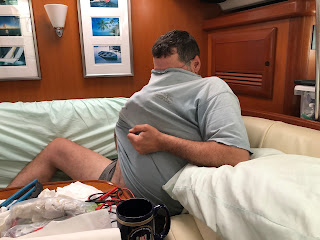 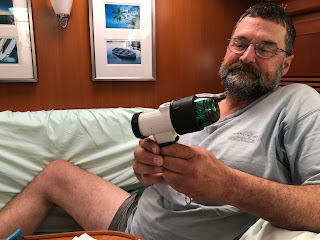 Thursday
Today, the pump out worked on our aft head, but Dave still needs to do more work on the forward head.  We noticed a tear in the cloth of the dodger, so Dave took that down and sewed a patch over it.  Not a pretty one, but it’s better.  He cleaned out the air conditioner lines, since we won’t be using it at anchor.  He learned, from a casual conversation with another boater last December, to put bromine tablets in the air conditioner raw water screen to help clean the lines.  The bromine tablet dissolved and ran through the system.  He could see that it was working after the first couple days.  The hose from the screen used to be clear, but was caked on the inside.  He could actually see through it again.

Dave transferred fuel from our jerry cans to the diesel tank, and gas into the Honda generator, and topped off our gas fuel tank in the dinghy.  He prefers to take the cans to the fuel dock to refill rather than take our boat to the fuel dock).  That’s where “shit happens”.  We made a trip to the marina by dinghy with the fuel jugs.  I took a shower at the marina.  And we met the Schneider’s once more to hand off a package.  They had to go to Gainesville, Fl for a part for their RV today.  On their way back, they stopped in Green Cove Springs to pick up the medication for Dave that arrived yesterday, one day late for us to pick up.  Dave later sent Colleen a text thanking her for being his Balto (the dog that delivered medicine in Alaska in a Disney movie).  She responded with “Ruff!”. 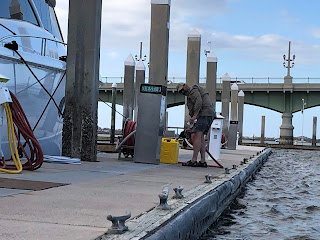 Posted by svluckofafool at 7:37 PM