Sunday
We slept in and had a lazy morning.  When I started looking at possible anchorages for tonight, I realized that this section of the ICW was very shallow once you were off the channel.  So we thought we better get a move on and get to Vero Beach to anchor for the night.  We left by 11:00.

This was a typical Sunday in Florida.  Lots of boats on the water.  And the seemed to get bigger the further south we went.  We were making good time today.  We had the main sail out, and used the motor.  Plus I think the current was in our favor.  We reached Vero Beach by 4:00 and decided to continue on to Ft Pierce.  Sunset was at 6:20.  We figured we could anchor right after dark if we had to.  We have anchored there several times.  Well, the sun was setting just as we were dropping our anchor.  It reached 88 degrees today!!

Monday
We were able to stay put today and do some things to the boat before we head over to the Bahamas.  We plan to leave from here and cross over to the northern Bahamas.

My projects involved cleaning and typing this blog.  Dave’s plans went all to hell.  The first project was put on the list just yesterday.  He had to sew a new patch in our Bimini that tore yesterday.  We really are due to have this one replaced.  We put that on next summer’s list. There are so  many steps involved with removing a piece for repair. 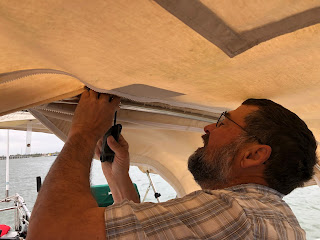 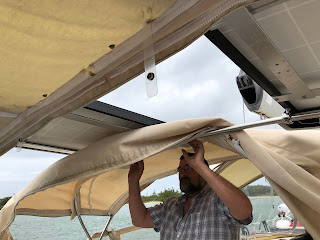 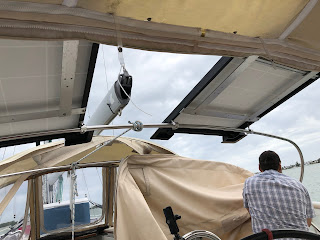 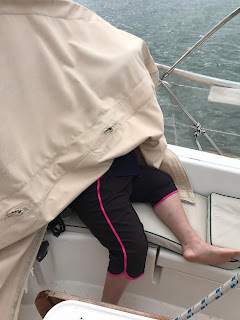 We needed to make water.  The water maker needs to be run every 2-3 days to keep the membranes fresh.  He put in the new part on the high pressure pump that arrived on Friday.  He started the water maker as usual, and discovered a leak in the boost pump.  He had to use a mirror to be able to see where the leak was coming from.  He discovered the spot and figures it was a seal.  He thought he might have to order a part.  But after digging into a storage area, he found the part he needed.   He had quite a correspondence with Cruise RO via e-mails and waiting for responses.  They think the fresh water pump was putting back pressure on boost pump through the carbon filter.  So he ordered a check valve for the carbon filter which was sent to friends in MN to bring to us in April.  Dave sent a text to the Clausen’s.  “Dear Erin, I really really hope you are still coming to the Bahamas.  By the way, can you bring the part with you that I just sent to your house?” 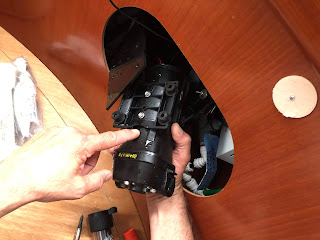 AND, Dave discovered a small amount of water under the engine.  This is where we found water last summer and thought it was fixed last November.  We’re not going to even talk about it until we get back to the states in June.  Dave just plans to vacuum the water as needed.  And we’ll have the life boat and ditch bag ready.  Such is life on a boat.
Posted by svluckofafool at 5:04 AM