The worst of the storm passed last night, so we moved closer to Spanish Wells.  Nancy actually sailed the boat for about an hour and was thrilled.  That was an experience she'll never forget.  After anchoring, we took the dingy to town.  We went directly to the Vault Snack Bar for lunch.  We had the Vault burger special.  Nancy and I split one and had conch fritters, first for Nancy. Dave was wishing he had split the burger with someone.  It has bacon, cheese, onion rings, lettuce, tomato and a special sauce.  Crazy good. 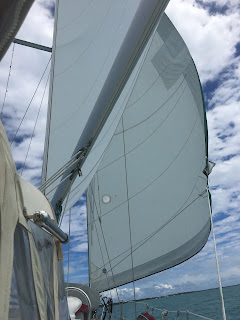 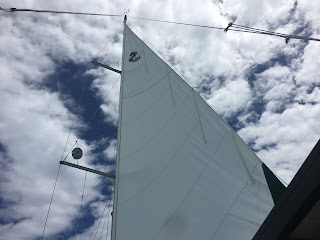 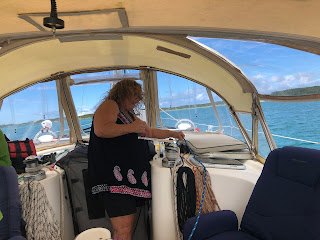 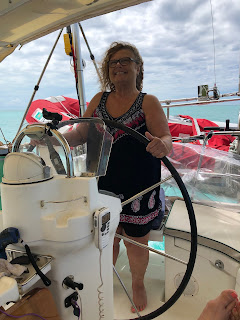 We walked to the BTC office, Bahamian Telephone Company, to renew Nancy’s phone plan for another week.  On the way, we checked out the beach on the north side of the island.  We stopped at the Ponderosa Shell shop for Nancy to check out a few other gifts.  She wants to take some Bahamian coins home with her, so she asked Delroy if he had extra coins.  He actually had lots of coins that he was happy to get rid of.  He said the bank in town probably wouldn’t have had what she wanted, so it was a lucky find.  Who knew? 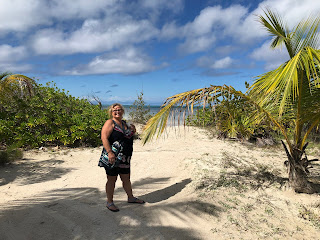 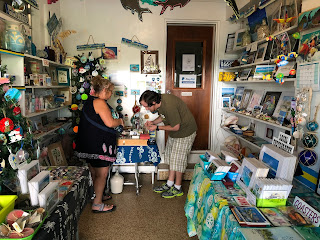 On the way back to the dock, we checked out a “fish pen” on one of the docks.  There were very large grouper, lobster, angel fish and a few others.  We took the dinghy through the canal that separates Spanish Wells from Russell Island to the west end of the island.  There is a bridge between the islands where kids jump off into the channel.  Looks a little shallow for this old lifeguard, but it doesn’t seem to be a problem.

On the way back, we stopped at the Yacht Haven Marina to catch the happy hour at Wreckers.  Their $3 special was a watermelon rum drink with mint.  Very refreshing.  Nancy also tried the local Goombay smash, very fruity rum drink.  We say the people that were in Royal Harbor on the Beneteau 370.  They had moved to this marina before the big storm hit.  They said it reached 70k at one time.  We also found out that several boats in that harbor had their anchors drag during the storm.  One almost ended up on the rocks.  Sure glad we stayed out of there. 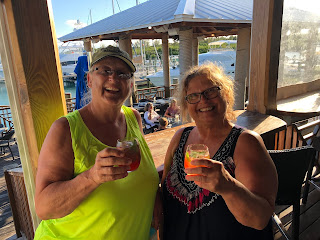 As we left, we saw another boat that we knew.  We stopped to say hello to Early Out.  When different people came out, we asked about Fred and Debbie.  They said they were tied up below.  Then they explained that they had bought the boat from them just last year.  We took their info and hope to cross paths again, good sense humor. 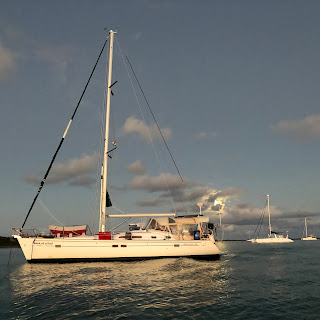 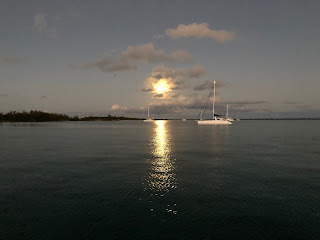 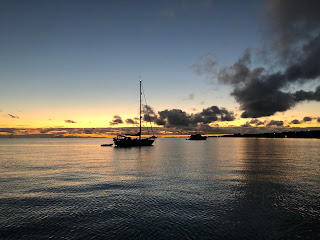 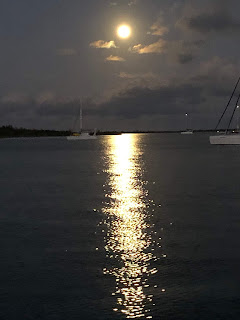