I spent some time rearranging our food provisions this week.  As we are using our stores, we have more room to regroup items into one place.  I also took an inventory to recheck my records on the “What’s on My Boat” app.

Our forward head has been taking on water.  It shows up in the bowl when it’s not supposed to.  So we spent time this week closing different combinations of water sources.  We discovered that it is leaking back into the bowl from holding tank.  That will be a future project.

Dave worked on the shaft brush today.  We added this to the shaft after we had our lightening problem back in 2014.  We were also trying to eliminate electrolysis issues, since we were going through zincs faster than normal.  This helps ground the shaft.  The brushes were fine, but the strap that holds it in place was broken.  We have a spare, but we did some soldering today.  The wires seemed too short to solder, but we loaded them up.  Dave reassembled everything.  But he’s not sure how long it will hold.  He does have a replacement he can use.  So he’ll consider that. 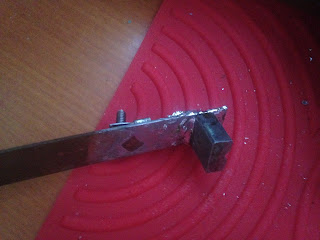 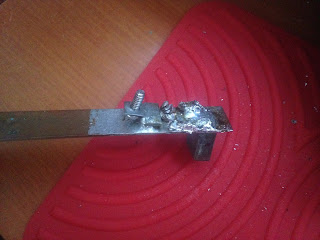 We planned to grill chicken on Thursday.  Then we would have chicken during the next two days of our passage back to the Exumas.  Dave has been wanting to make bread on the grill.  So he did that today, too.  He found a recipe online that was very similar to the bread recipe we already use.  Just different amounts of salt and sugar.  The recipe he used called for the optional ingredient of za’atar.  So he looked that up, and it was a blend of spices.  He mixed up his own za’atar with sesame seeds, cumin, oregano, salt and pepper.  (sumac and thyme but we didn’t have those). It turned out like pita bread and was AWESOME!

We also spent time doing laundry and computer updates.  We have free wifi at this anchorage, so nice to get some wifi things done.  Usual boat days at anchor. 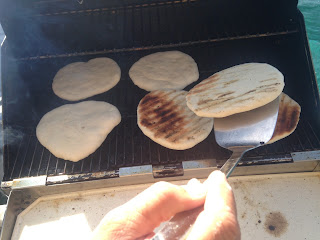 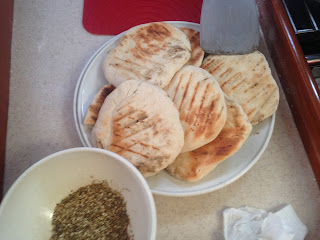 Posted by svluckofafool at 6:47 AM