There isn’t a catholic church in Spanish Wells.  I think this is the first time in my life I have not been able to go to a catholic church on Easter Sunday.  Over the last couple days in Spanish Wells, I checked out the churches and their time of service.  I found 3, and the Methodist was the one I was most familiar with.  The other two were Gospel Chapel and People’s church.

Dave volunteered to go with me.  I always enjoy it when he joins me.  And it was nice to have his help to handle the dinghy and try to stay clean.  He thought he would trim his beard on Saturday, but he had the wrong setting on his razor and ended up shaving off his beard.  That doesn’t happen very often.

The grounds surrounding the church were beautifully landscaped.  And the church itself was very well maintained.  Everyone was very friendly and welcoming.  They had about 15 people in the choir, and they wore robes.  Dave thought they sounded like a middle school choir.  I just thought they had a lot of spirit.  During the service, they had the children come forward for a song and special blessing.  There were about 8 ranging in age from about 3-7.  They sang a song along with a recording and used hand gestures.  Really cute.  One poor little guy stood off to the side and turned around.  He did not want to be there. 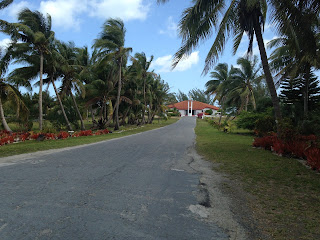 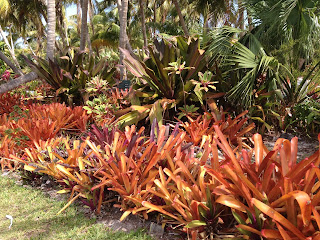 One thing I have never seen, and I’ve been to other Methodist churches, was a separation of the congregation at the end of the service for those wishing to stay for communion.  An announcement was made that anyone wishing to leave should do so during the fourth verse of this song.  We decided to leave at that time.  Well, I think 3/4 of the church left.  Not sure what that was all about.

As we were leaving, an older gentleman on a golf cart asked us if we wanted a ride.  We decided to take up his offer.  We were about 16 blocks from the dinghy.  He told us he was retired and loved helping people out with rides.  He gave us his phone number and told us to call him anytime.  He would even give us a tour of the island.  This really is a friendly community.

Back at the boat, we had a really nice ham dinner.
Posted by svluckofafool at 2:03 PM