We sailed/motored to the northwest tip of Long Island today.  Didn’t catch any fish.  Dave did see a whale surface and dive again.  Dave’s thought for the day:  There are a couple sayings that he’ll never hear himself say:  I’ll never have to fix that again.  There, that should be good forever.

We hung a sarong on the stern to shield us from the sun.  It really made a difference.  When we arrived at our anchorage, we pulled in the fishing lines.  Then I figured I should take down the sarong, not that there would be anything behind us when we put the boat into reverse to anchor.  It just wasn’t needed anymore.  So, as we were going in reverse to set the anchor, there was a strange vibration.  When we finished, we noticed a 1/2 gallon plastic jug floating beside our boat.  OOPS!  that was the jug we drag behind the boat to attract fish.  With the sarong hanging behind us, we forgot about bringing in that jug.  Stupid!!

Dave lowered the dinghy, put on his snorkel gear to check it out.  Yep, the line was around the prop.  He took his  special knife below to cut it loose, Hooknife Emergency Line Cutter.  It has a hook, saw, a point blade and it can be attached to a boat hook, if needed, for length.  Of course it took several attempts, since he had to hold his breath while he worked.

It was early enough for us to play in the water for awhile.  We took the dinghy to check out some areas of coral.  Nothing spectacular today.  The area where we were anchored was all sand.  It makes the water look like a swimming pool.

When we were at this anchorage a couple weeks ago, the winds were so strong that we were rocking and rolling horribly.  Today was totally opposite.  Beautiful calm seas. 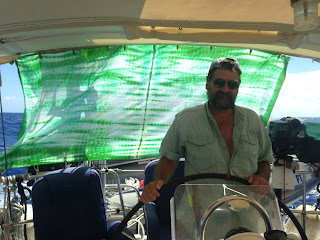 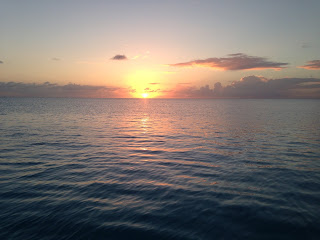 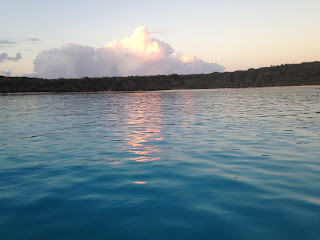 Posted by svluckofafool at 7:21 AM