Dave has been having second thoughts about having Bayline boat works haul us out on Tuesday.  He thinks the ramp is too shallow.  And he doesn’t like the system of using a trailer instead of a lift.  He has too many night mares of hauling out our C&C and Catalina with a trailer.

We decided to take our dinghy to the Fairhaven Shipyard to check out their approach for the lift.  There wasn’t anyone around to talk to, so we decided to call them tomorrow.

It was a nice day on the water, so we decided to tour further up the harbor.  We could see a seafood market from the water, but no place to tie up our dinghy and go to shore.  After we went under a highway bridge, we saw a fence that came down to the shore by a 7-11.  We decided to tie up there, at least we could lock it to the fence.  We asked at the 7-11 how we could get to the seafood market.   We ended up walking about a mile to get to the market.  We had to go a few blocks inland to be able to get crosswalks for the highway.  We made it to Kyler’s Catch Seafood Market and Kitchen.  Their boats were tied up on the water.  Doesn’t get any fresher than that.  We each had their scallop dinner since this area is known for it’s scallops. 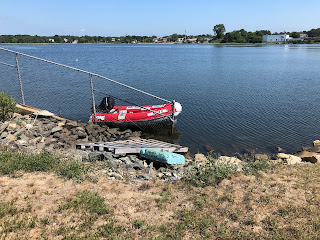 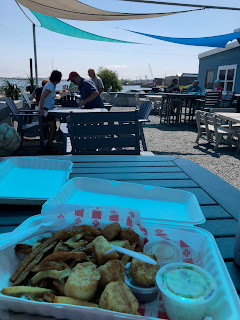 As we came back we checked out the different fishing boats.  The water taxi driver had pointed out the herring and scallop fishing boats to us.
Back at the boat, we made water with the water maker.  Hoping Fairhaven Shipyard would be able to do our short haul tomorrow, we got the fenders out and tied into place to dock the boat.  The surveyor wants to see the inside of the boat while it is still in the water.  Then the boat is hauled out just long enough for him to look at the outside and put back in.  That’s why they call it a short haul vs hauling the boat out and putting in on stands for long term.  Dave spent some time making room in the aft cabin for the surveyor to see the area where water is coming in.

While we have been on the mooring ball in this harbor, we have been near the docks where fishing boats unload their fish.  The water taxi driver also does tours of the harbor.  She told us that the fish are off loaded 150 lbs at a time.  And they usually carry a couple thousand pounds.  Then they have to take off any remaining ice.  Sometime during every night we were here, it would get noisy and STINKY.
Posted by svluckofafool at 1:12 PM