We picked up the rental car by noon and took off for Boston to pick up Dave’s mom, Alice.  It’s about a 1.5 hours drive, if no traffic delays.  Soon after we left, we started getting notices of her flight being delayed.  We stopped in Attleboro, MA for gas and had lunch at a local diner, Morin’s.  I had a meat pie.  Don’t see that on the menu often.  It was like meatloaf in a pie crust. 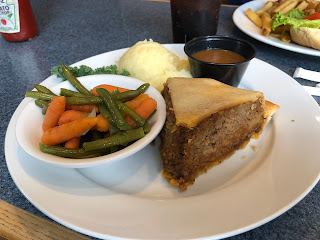 The flight was now delayed a total of 3 hours.  So we stopped in Norwood so I could go to a movie.  I wanted to see Mama Mia, Here We Go Again.  Dave just sat in the car and watched a movie on his phone.

We planned to meet Alice at her gate, but they would only let one person meet her.  So I waited in the baggage claim area.  She landed at 8:00pm instead of 5:00pm.  We had a hotel room reserved west of the city, so we headed that way and found an IHOP for a late dinner.  While we were there, a young lady was coming in and out and using the bathroom.  Later she came in upset and wanted the restaurant to call 911 on their phone.  She talked to someone then went outside.  An ambulance showed up, but she was no where around.  They said they had been dealing with this a couple times today with the same person.  The workers said she was homeless and lived in the trees across the road.  They apologized for the drama, but we said it was like we had “dinner and a show”.
When we arrived at the Holiday Inn, they recognized me as their IHG guest of the day.  That is their points/rewards program.  I think it was a “welcome back” since we haven’t stayed at a Holiday Inn for quite some time.  They gave me a little bag with a snack bar and potato chips and let me pick a free beverage (no alcohol, darn).  I also received 1000 points for the evening.  What a way to finish the day. 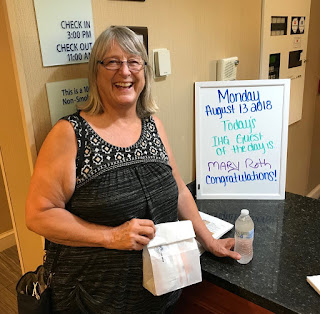 Posted by svluckofafool at 1:24 PM