September 2, 2018 Fairhaven and the SSB repair

We took our dinghy to Fairhaven on the east side of the harbor this morning.  As we were looking for a public dinghy dock, we saw a couple whaling boats on the water.  It looked like they were training for a competition.  We use the Garmin app with Active Captain on it for directions.  We didn’t see the dinghy dock right away, so I looked it up on the app.  It said “difficult to spot but just south of the rowing whaleboats at the Fairhaven Shipyard”.  We got a good giggle out of that since we just saw the whaleboats. 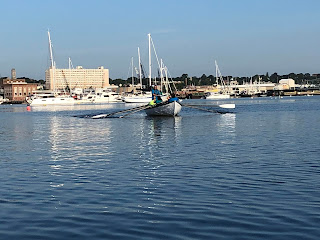 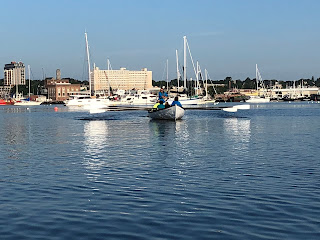 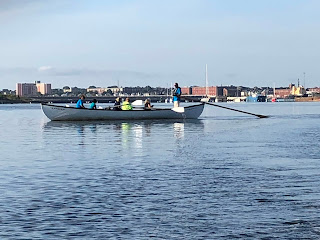 After tying up, we walked to Margaret’s for breakfast.  It had been recommended by Ted and Judy.  It was a little diner type of place with an awesome menu.  I had a Vermont omelette made with Vermont cheddar cheese, bacon and apple.  Dave had the 3 Greens omelette with Portuguese Linguica meat, goat cheese, spinach, basil and scallions.  We swapped half and half.  Very good.  The Linguica was more like a cured meat than a sausage. 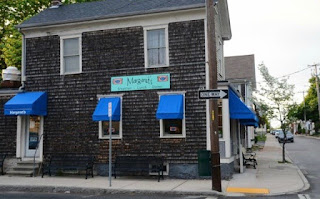 After breakfast, Dave headed back to the boat and I walked to St Joseph’s church.  I walked through the historic downtown area.  They had several beautiful buildings that were built  in the late 1800’s as gifts from the Standard Oil multi-millionaire Henry Huttleston Rogers, who grew up in Fairhaven and spent his summers here with his family. 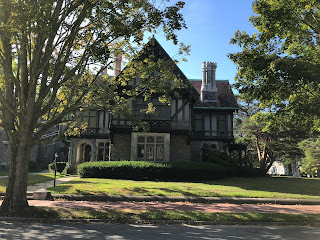 After church, I walked to a public boat launch and called the water taxi to take me back to the boat.  Pretty handy.

Dave had been working on the Single Side Band radio-SSB.  Last fall, during hurricane season, he had disconnected the antenna and the meter from the radio to protect it from lightning.  It hadn’t worked right since he put it back together this spring before leaving Georgia.  With some trouble shooting and tracing through the system, he found two problems.  I will try to describe them for those that are interested.

The grounding sheath on the male coax connector had broken.  Dave made a new connector, but the radio still wouldn’t tune.  Dave had 50 feet of coax wire for emergency replacement.  He was glad he had taken it out of our storage unit and brought it along.  He used it to bypass everything and the radio tuned.  He even heard someone from the Black Hills of SD, where we used to live.  That made him review the whole system to find the “weak link”.  He remembered reading that the SWR meter made by MFD electronics was cheaply made. He took that apart and found 2 loose screws that connected the coax connectors on the meter to the circuit board in the meter.  He tightened those and put it back together.  Everything is now working!!  He said it really felt good to take the time to chase down the problem.  We don’t use the SSB much in the US, but we did when we were in the Bahamas.  There are nets where you can check in.  Dave would like to do more of that.

Posted by svluckofafool at 12:54 PM