Since we had a long weekend to work on the boat and get it ready to haul out, we decided to be tourists today.  Plus we thought it wouldn’t be as busy as on the weekend.

I have been fascinated with the whaling industry since I read Heart of the Sea about the whaling ship Essex.  Melville based Moby Dick on the true story of the demise of this ship.  New Bedford has an amazing whaling museum, which we spent the day touring.  You are greeted by the skeleton of a sperm whale.  They had a replica of the heart.  I happen to catch a child playing inside a vessel.  It helped visualize the size of it.  They also had a 66 ft blue whale skeleton. 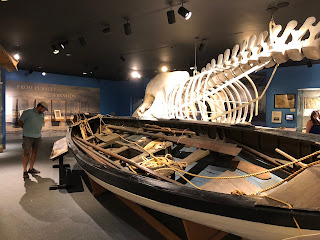 They had many fascinating exhibit halls.  There was an exhibit on Joshua Slocum, the first person to circumnavigate the globe singlehandedly in 1895-98.  He built his boat, Spray, in Fairhaven, MA (across the bay from New Bedford).  He left from Boston, but returned in New Bedford.  He wrote a book, Sailing Alone Around the World, which Dave has read and is recommended by many sailors.  We no longer have a copy of it, but it is on my reading list.

There was an exhibit dedicated to Herman Melville and Moby Dick.  Living in New Bedford inspired him to write the book.

Other exhibits included replicas of whaling ships and the boats used to harpoon the whales, one on knots and all the uses, beautiful Scrimshaw, the diversity of this community due to the whaling ships traveling the world and bringing people and customs back with them, artwork depicting the whaling era, the history of the textile mills, and much more.

The museum admission also included two buildings across the street, the Mariner’s Home and the Seaman’s Chapel.  The Seaman’s chapel was in the movie Moby Dick.  Since the sailors lost at sea weren’t buried in a cemetery, many families had plaques mounted on the walls in their memory.

We had lunch at the Quahog Republic Whaler’s Tavern in an old building on cobblestone streets.  The Quahog is a local clam pronounced ko-hog.  Then we had happy hour chicken wings at Rose Alley Alehouse, another old building.  It was good to get back to the boat by dinghy while there was still daylight. 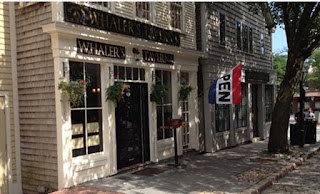 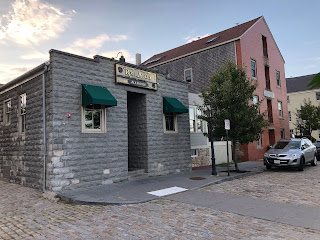 We decided to watch Moby Dick at the boat, just to round out the day.

Posted by svluckofafool at 3:53 PM