Monday 1-30 Boat cleaning day, again
It was too calm to sail to the Exumas today, so we spent the day working on the boat.  This summer, a bottle of epoxy resin had leaked from it’s pump and stained our fiberglass.  It was even stored in a plastic bag, so it must have eaten it’s way through the bag.  We had tracked it several places before we noticed it.  We have been trying several cleaners with no luck.  Today Dave tried a 3M buffing/waxing compound and it worked.  I worked on some of the smooth surfaces while Dave worked on the non skid surface.  He used a brush and green scrubbing pads to get into the grooves on the non skid.

As we were working, Dave told me about the dream he had last night.  He has been studying French for a few years, but more seriously this last year.  He dremed he was in a French restaurant and was trying to order, but couldn't remember what to say.  The waiter was helping him in perfect French.  Soooo, he knew French well enough for the waiter to speak correctly, but not for himself.  Guess that means he knows it, but is still self conscious about his French.  He said “Je suis nerveux”.

I abandoned him after awhile and did some baking.  I also went “grocery shopping” in my storage compartments. 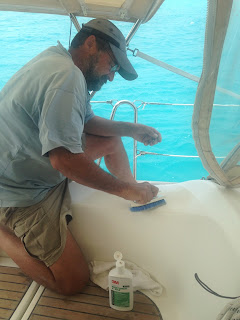 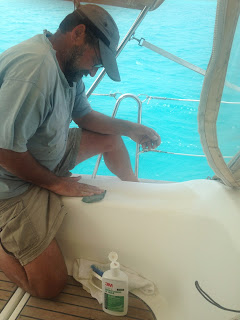 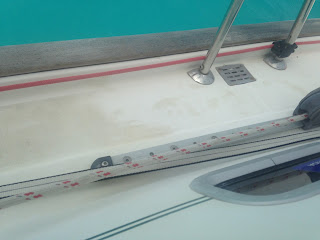 Posted by svluckofafool at 7:18 PM