Dave checked the internet for a phone number to check with the local hardware store about their propane.  He called a number and asked if they were the store in Rock Sound that has propane.  The guy answered by telling Dave what days they had propane and hung up.  Dave didn’t even know if he had the right store.

We checked the Waterway Guide and found what we thought was the right number.  Dave called, got all the right information, and even asked about them delivering the filled tanks (we read that somewhere).  Yes they did, but their delivery truck was out right now.  We told them we would bring the empty ones to the store, just would like them delivered afterwards.

We decided to get going early so we could go out for breakfast.  We walked to Sammy’s, which is about 2 blocks off the main road, but there weren’t any other restaurants on the way to the grocery/hardware store.

After we left the restaurant and were heading down the main road again, a guy in a truck stopped and asked if we were the ones that called about the propane.  Then he told us to climb in so he could give us a ride.  He asked us about our visit to Rock Sound.  We told him how nice everyone was, but he just topped everyone else by picking us up.  We stopped at the propane facility to fill the tanks, which was between us and the hardware store.  Then we had to go to the store to pay for the propane.  While Dave was paying, I ran into the grocery store for a couple things.  Then Willie gave us a ride back to the dock.  He drove right out onto the dock, actually.   We tipped him $10 for the delivery and for having to wait for us with the groceries.

While I was in the grocery store, a lady stopped and asked me if I had been at the Catholic church last Sunday.  She and I had visited awhile after church and she recognized me.  I found out her name was Laura and told her I planned to see her tomorrow.  Before leaving the store,  she met Dave, too.  When she looked at our cart, she offered to give us a ride back to the dock.  That was so sweet, but we already had Willie waiting with the propane.  Everyone is so nice, I guess like any small town.

After we delivered our groceries and propane to the boat, we returned to shore with 4 diesel jerry cans that hold 5 gallons each.  Dave promised me ice cream if I helped him.  After filling the cans, we each had a drumstick that was $3.50 each.  Our freezer won’t keep ice cream frozen, so this is a rare treat.  Dave carried 2 of the cans about a block back to the dock.  I met him at the end of the dock with one of the cans.  Then he returned to the station for the last one.   Those are heavy suckers when they are full.

I walked about 2 blocks in the opposite direction to pick up beer at a liquor store.  We are heading to the Exumas this week and will have a guest for 3 days.  I thought beer would be cheaper here, less touristy.  Dave was going to meet me, in case I decided to buy a case.  The Sands light was $15 a six pack and the Sands Radler, a grapefruit beer, was $18/ six pack.  So I only bought the two.  I waited a little while for Dave to help me carry the beer, but decided it would be no problem to carry it myself.  I met Dave when I was about a block away from the dock.

When we got back to the boat, Dave asked me about the liquor store.  I told Dave that they had 2 cl bottles of Underberg that we had in Denmark.  So he decided to go back and get 4 of the little bottles to share with our Danish friends that will be visiting in April.  Dave explained to the lady in the liquor store that he was the luckiest man on earth.  He has a wife who likes to sail and she can carry her own beer :)

That was a productive day.  We spent the rest of the afternoon reading in the cockpit with an awesome breeze.  After storing all of our purchases, that is. 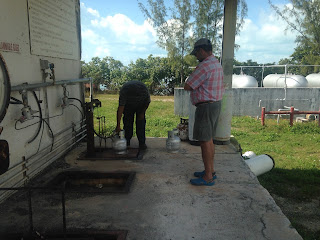