I attended mass at St Theresa’s Catholic church at 10:30.  I love the bongo drum and organ music at this church.  You feel like dancing throughout the mass.  An older Bahamian lady sat next to me and told me a joke before mass.  She started by saying that the Pope wants us to be happy in church, so here is something to make you smile.  There was a married couple that the husband only went to church with his wife on the Sunday closest to Valentine’s Day.  When they arrived at their home afterwards, he came around the car, opened the door for her, picked her up and carried her into their house.  The wife asked him why he was doing that.  He said he wanted to show her that she was his Valentine.  But when he continued to carry her around, she asked him why he hadn’t put her down.  He said “didn’t you hear the priest today?  He said to lift your troubles up to the Lord.” 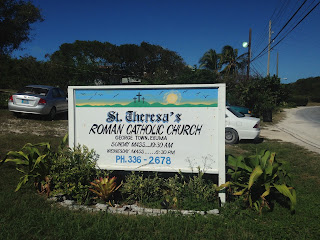 We ran the Honda generator to make water today.  The NextGen generator is running, but not getting the power to the control panel.  Dave has been trouble shooting it for awhile.  He placed one of our 5 gallon gas jerry cans on the swim platform at the stern of our boat because it was leaking.  Later he realized it was missing.  It must have fallen off of the swim platform.  The water was clear enough to see that is wasn’t under the boat.  So he looked around the area with the dinghy, but couldn’t find it.  It was probably floating just below the surface and will end up on a shore somewhere.  Bummer!!
Posted by svluckofafool at 10:19 AM