We planned this anchorage so we could dingy to Rudder Cay Cut this morning.  We wanted to snorkel the life sized statue of a mermaid sitting at a grand piano.  We have passed by here a couple times before, but the timing was never right to stop to see it.

David Copperfield made a stainless steel sculpture and placed by one of his 11 islands.
Musha Cay has a resort you can rent for $57,000/night (2015 price quote).  It has 5 houses for 24 people.  Only one group is allowed to rent it at a time.  We passed it on our way to Rudder Cut Cay.  We noticed a helicopter port on Musha and an airstrip on Cave Cay to the north.  You can check it out online.  Pretty secluded place if you want to pay for the privacy.  Check out www.MushaCay.com.

We had a general idea of where to find the statue from our charts.  But we stopped another couple in a dinghy that were wearing wet suits to see if they could direct us.  They gave us very clear directions because they had been spending all morning looking for it.  There is usually a current in this area.  They suggested anchoring our dinghy to the north of the sculpture and let it drift back over it.  That was great advice.  I had to hang on to our dinghy to get a good picture.  It was pretty cool to see. 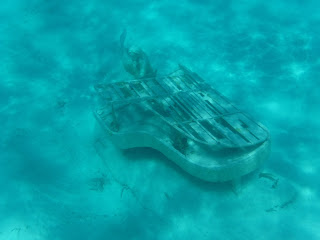 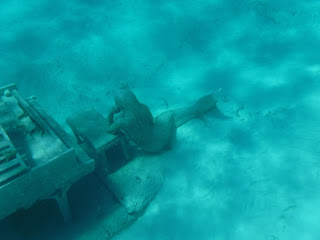 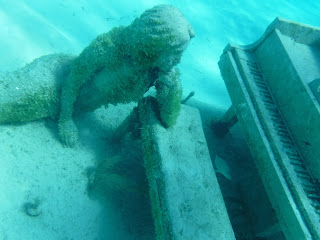 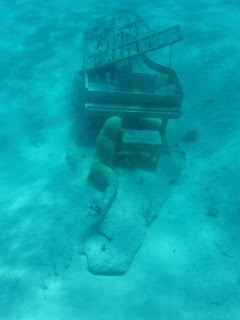 We returned to the boat and motored to Lee Stocking island about 15 nm south.  We were expecting another cold front from the north with strong winds.  We would have good protection there.

Right after we finished anchoring, a catamaran anchored too close for comfort.  When the wind changed, we were afraid he would swing right into us.  So we just moved forward a ways, since we had room between the other boats.  The captain of the catamaran called us and apologized.  He said he would have gladly moved if we would have called him.  Dave was very cordial and just mentioned that cats sometimes swing different than monohulls.  Later, Dave went outside to close up the boat for the night.  He had me come outside to look at the catamaran.   We were still facing west, but the cat had swung to face the north.  It would have been directly on top of us if we hadn’t moved.  Dave figured they were new to boating.
Posted by svluckofafool at 9:59 AM