Happy Birthday to my sister, Janice Moore!!
Kaitlin felt much better after a good night’s sleep.  After breakfast, we took the dingy to the Sea Aquarium Coral Garden in Land and Sea park.  It was a fantastic place to snorkel in calm water.  There were hundreds of fish swimming all around us.  And the coral formations were beautiful, too. After about an hour there, we moved to Dundas Rock.  There is a cave you can snorkel into.  We got in the water, but it was exposed to the wind through a cut between the islands, so it was too rough to try to enter the cave.  We road around the area, but didn’t see anything else worth snorkeling.  We started out with the best.  We explored the area south of where we anchored looking for a place to spearfish.  Nothing looked too inviting.  But we saw some nice private properties. 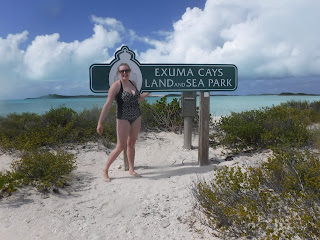 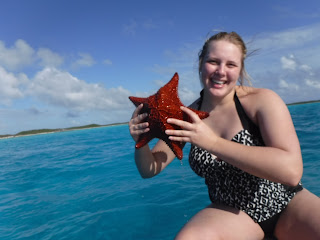 Back at the boat, Kaitlin and I thought we would float behind the boat with a couple beverages.  We tried to use inflatable chairs behind the boat, but the current was too strong.  After a few laughs and being pulled back to the boat by Dave, we gave up.  Good thing we were tethered.  We took the dinghy out to where we could see the sunset on the water.  After that, we just drifted in dingy and visited until it actually got dark. 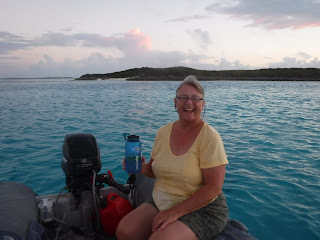 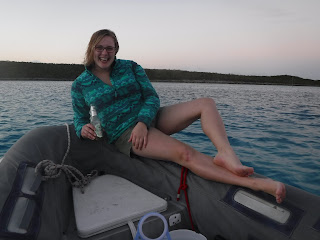 We had a great mahi dinner and listened to the Super Bowl on the Single Side Band radio.  After we lost that transmission, we had to just check the score periodically on the internet.  It would have been a great game to watch.

Posted by svluckofafool at 8:30 AM