Kaitlin Schneider's flight arrived at 8:40am.  We went to shore and met Ida in her pick up truck.  She wanted us to ride with her to her house and pick up the cart.  Then she said we could just take the golf cart and pick her up ourselves.  Worked for us.

At the airport, less than a mile away, there was a building that was open, but no one there.  Shortly before the plane arrived, another passenger arrived.  We told them that no one was here to check them in.  He said “I know, they gave me a ride here this morning.”  Sure enough, the airport agent picked up the passenger on his way to work.

Kaitlin arrived safe and sound.  We made her drive the golf cart.  Remember they drive on the left side, or proper side, as they put it.  We dropped off the cart and went to pick up our fresh bread.  Then we stopped at the grocery store so Kaitlin could meet Civian.  Her niece was there again, since it was Saturday.  Dave asked her “If you wanted a treat, what would you pick?”  She was pretty shy, which surprised Civian.  He told her if she didn't tell him, he would buy her a bottle of ketchup.  That helped her make up her mind.  So Dave ended up buying her candy.  He just loves teasing kids and making them smile. 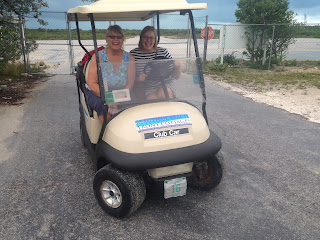 We then piled into the dinghy and headed to the boat.  We sat and visited and had some coconut bread.  We made plans for the 3 days she was able to spend with us.  Kaitlin arrived nursing a cold.  So we crossed our fingers and washed them often, hoping not to get it. 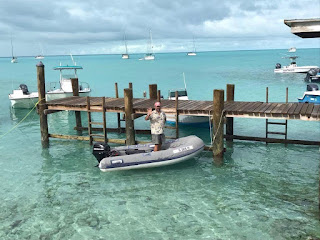 We wanted to head north about 10 miles for a couple nights.  We headed out into Exuma sound, but it was kind of rough and Kaitlin ended up getting sick.  So we turned around and headed back in to go north on the bank side.  Much calmer.  Kaitlin was even able to take a nap.

We anchored at Compass Cay, which is on the south end of the Land and Sea park.  We were able to watch the sunset while Dave grilled chicken.  There was an island with palm trees that made a pretty shoreline for the sunset.   I made tzatziki sauce to have with our chicken and all or our great fresh vegetables.   Since Kaitln was sick and just finished 3 busy days of work in the Bahamas, she headed to bed early.  Poor thing just needed some sleep. 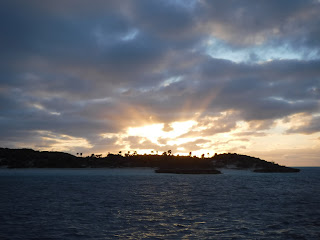 Posted by svluckofafool at 8:09 AM