We had a great night’s sleep without earplugs!!  We left for Cat Island at 7:30am, just after sunrise.  We motor sailed most of the way because the winds were light and variable.  As we were leaving, we actually saw the winds recorded at 0 k.  That was a first.  Once we were away from the shore, it picked up to to 15 k around 10:00.  The southern end of Eleuthera is called the Whale’s Tale.  The land splits into two peninsulas similar to the tale of a whale.

We were at the South East tip of Eleuthera by 12:30.  Then we had about 10 nm in open water to get to Little San Salvador.  We were there by 2:30.  We had contemplated stopping here for the night, but the only bay to anchor is a playground for cruise ships.  We could see 2 cruise ships anchored off the island from quite a ways away.  So we stayed with our original plan to go on to Cat Island. 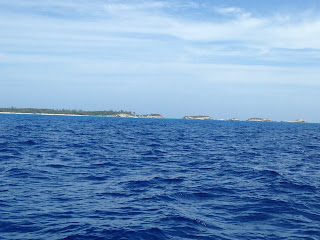 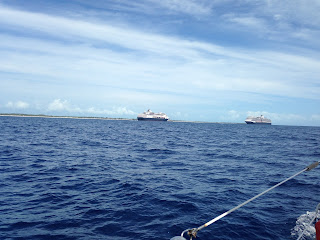 We strayed off course a little to follow a shelf in the ocean.  We were hoping to catch fish on the passage.  We only caught 2 barracuda about on hour away from Cat Island.  It’s exciting to have a bite and to pull them in, but disappointing when it’s barracuda.  They carry ciguatera from eating reef fish.

We anchored at Bennet’s Harbor by 6:00.  It is in the northern half of the island.  We had
cocktails in the cockpit to unwind from the day at sea.   We enjoyed fish tacos from left over wahoo.

Posted by svluckofafool at 3:56 PM