It was pretty windy this morning, but I took the dingy to shore by myself to go to church.  When you leave the dinghy dock, you have to walk around Lake Victoria to get to the Catholic Church.  It was only about a 10 minute walk.

St Theresa’s mass was at 10:30 am.  It was a lovely church with 2 wings.  They probably added on in the past.   The holy water font was a beautiful conch shell. I have been to so many small churches that sing a cappella.  So it was a real treat to have both an organist and a bongo player.  Everyone is always so friendly.  And most of the people walk through out the church giving each other the “sign of peace” during the mass, especially the children.  After communion, all the children lined up and had the priest give them individual blessings as he placed his hands on their head.  Even the ones that were old enough for communion joined in. 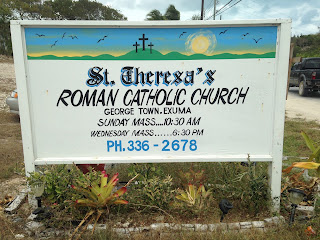 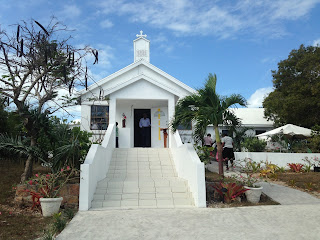 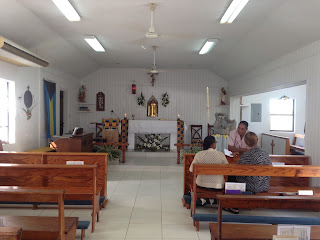 
Our friends from Minnesota, Joe and Erin Clausen arrived today.  They flew into Georgetown and took a taxi to the dinghy dock.  It was very windy, so I stayed at the boat when Dave went in to pick them up.  Plus it’s pretty slow going in the dingy with 4 people and luggage.  Dave took our foul weather coats with him.  They were all 3 soaking wet from the rough ride.  They had also put their luggage in large contractor bags to keep them dry.

We spent the afternoon visiting.  They had a new underwater camera they wanted to try out.  So Joe jumped in with his snorkel gear and took pictures of our prop shaft.  That was the first I had seen of the corrosion.

We moved our boat to the Stocking Island for some protection from the wind at anchor.  Just as we were finishing our anchoring, another boat came right in front of us and anchored closer than we were comfortable with.  We thought he was over our anchor, which makes it difficult to retrieve in the morning.  So Dave called him on the VHF radio and asked him to move.  He proceeded to argue with Dave about how he thought the distance was OK.  Most people would apologize and move.  But Dave let it go, probably because we had guests aboard.

It was too windy to go to shore this evening, so we had a spaghetti dinner on the boat.  It was a challenge to eat with the boat rocking from the wind.  We’re blaming the spilt wine on the rocking of the boat.
Posted by svluckofafool at 11:31 AM