This morning we used the rental car to check out the northern half of the island.   We took a rutted back road to the beach resort of Chez Pierre because we heard the restaurant was good.  It was a very rutted and rocky road.  It was only about 10:00, so we checked out the place, which seemed deserted, and said we’d call if we planned to come back for lunch.  The prices were a little high, and we didn’t want to drive down that road again.

Next we drove down a small rutted, rocky road to the ruins of the Adderly Plantation.  we had to hike along the shore and then inland to find the remains of the buildings. 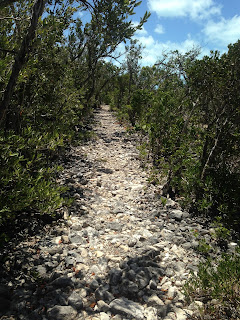 This plantation was started in 1790 by a British born subject with a business in Nassau.  Many plantations were started in the Bahamas at that time by Loyalists who didn’t want to remain in the United States after the Revolutionary War and be ruled by Americans.  I am reading the novel Wind from the Carolinas by Robert Wilder that tells the story of a family moving here at that time.  So it was very interesting to actually see the ruins.  And I would recommend the book to anyone.  It is a novel, but gives a good history of the Bahamas from the late 1700's to the 1900's. 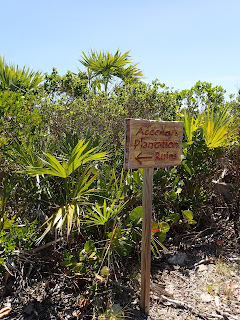 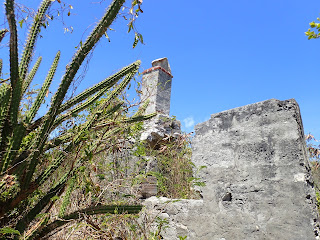 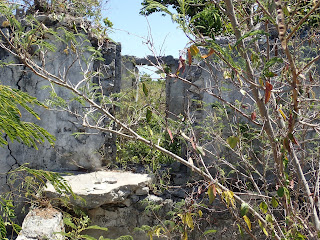 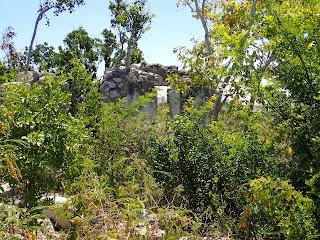 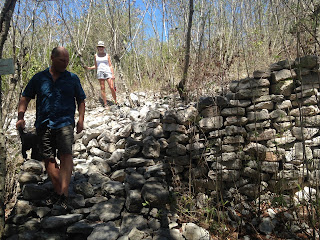 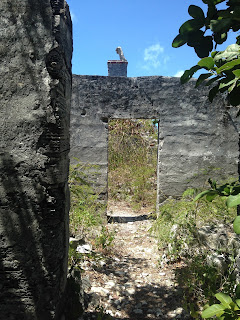 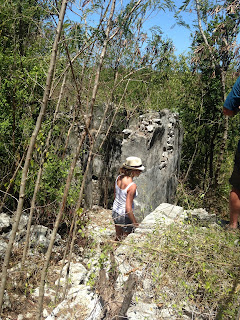 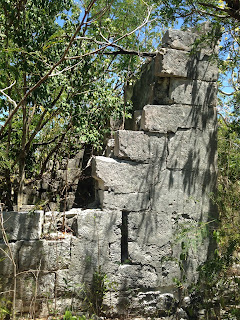 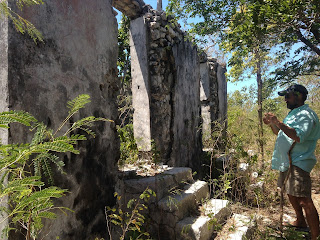 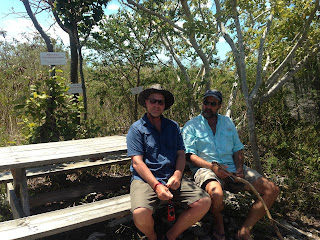 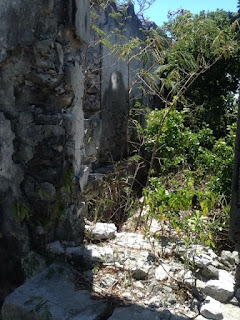 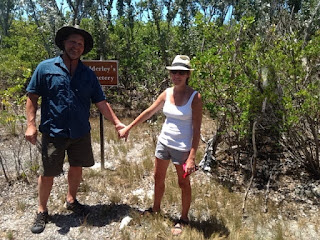 Next we drove to the Stella Maris Resort on the Atlantic side of the island to see the coast.  There was a fun bar/restaurant overlooking the ocean where we had lunch, the Moonshine Bar and Grill.  We sat at the bar and had fun visiting with Sue, our bartender.  She was telling us that her husband was a retired school principal and played in a band.  Joe and Dave looked at each other and thought, we’ve heard this story before.  So I asked, was his name Rodney?  And did he own the Sunset Restaurant?  She laughed and said “Rodney is my husband’s cousin!  Have you met Rodney?”  Joe had the best pina colada in the world at this place. 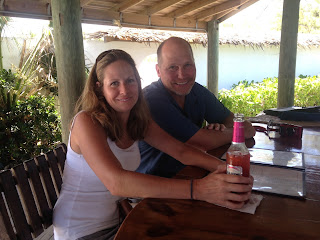 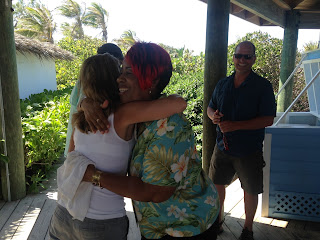 This resort had a swimming pool that had been carved out of the rock and fed by waves from the ocean.  They also had hammocks and benches to view the ocean and a real swimming pool.  It looked like a great place to stay.  We’ll have to check out their prices on line. 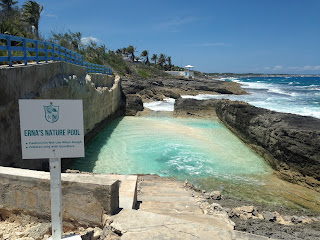 After we left the resort, we followed the shore and found a sign that said Rock Ponds.  So we parked the car and walked a board walk down to the rocks.  There were more crashing waves in this area.  Joe walked out quite a ways on the rocks.  We thought for sure he would be swept into the sea and dashed upon the rocks.  End of vacation.  But he survived. 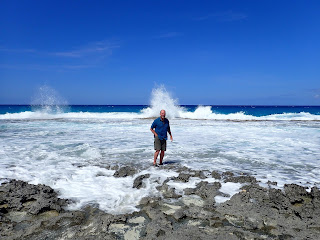 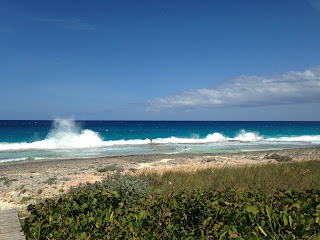 We made it back to Salt Pond to return the car by 4:00.  First we stopped at the only gas station to fill the tank.  I think we only used 4 gallons of gasoline.  The guy at the station knew it was one of the rental cars.  They probably know everybody’s car on the island.  Of course the big red arrow on the wind shield that said KEEP LEFT was a dead give away.
It was interesting visiting with Alton Fox when we returned the car.  The Fox family owns a lot of businesses in the area.  He had the strangest accent.  It was a mix of Bahamian, Australian and New England.  He was the one who told Dave and Joe about spearing the fish in the head to avoid the blood and the sharks.  He didn't even check out the car after we parked it.  Pretty laid back.

Back at the boat, Joe showed us how to make pasta carbonara sauce with egg and bacon.  Very good.  We also pan fried tuna steaks that we had bought here at the grocery store.  Also yummy.  Another great day!
Posted by svluckofafool at 10:02 AM