Today we motor sailed to Governors Harbor about 25nm south. We all went to shore together in the dinghy.  Dave took two diesel jerry cans to buy fuel.  He went back to boat with the fuel and to “tinker”.  Cheryl and I walked through town.  We were impressed with the produce in the grocery store.  It was better than in Hopetown.  We checked out shipping costs for Cheryl to ship some of her belongings back to the states.  Sounds like the post office will be the cheapest route.  And each package can only be 22 pounds.  We found the tourist office and picked up some information about Eleuthera and Governors Harbor.  Next we toured their library.  It is in a beautiful 100 year old building that reminded you of an old one room school house.  We looked through the Nassau newspaper to catch up on the outside world.  Didn’t miss much.  Sure glad we aren’t listening to Presidential campaigns everyday.

We found out from a couple people that there was a fish fry every Friday night.  One of our chart books mentioned it, but not which restaurant.  That’s because it is held on the beach.   It started at 6:00.  And since it was only about 5:00, Cheryl and I asked someone where we could find a bar.  They directed us to Ronnie’s bar for the coldest beer in town.  We sat right at the bar and were treated to some local flavor.  This was where the guys hung out after work on Friday to harass each other.  We just laughed at them because we couldn’t follow their conversation, even though they were speaking English.  Beers were much cheaper here than in the Abacos.  Kind of like buying beer in Miller, SD vs Minneapolis, MN.  Everyone made us feel welcome.

We met Dave at the fish fry on the beach about 6:00.  There were grills outside cooking chicken and pork chops.  And there was a fire with a pan of boiling oil frying the fish.  There was a building that was a step above a food stand where they served the food and drinks.  On the beach there were 2 separate tables.  One was serving conch salad made as you ordered it.  The other had desserts.  Dave had his own bowl of conch salad before we arrived.  Then Cheryl and I shared a bowl as we waited for our dinner orders.  The man making the conch salad told Dave that he uses all the parts of the conch in his salad.  And that will help him with his sex life!  We also bought coconut and pineapple tarts for dessert.  The meals had your meat choice served on a bed of rice and peas.  Then you also had 2 sides.  All for $13.  They had picnic tables set up on the deck of the building and on the beach.  We sat with a lady and her son that were here in a vacation rental.  She had spent a lot of time on sailboats before her 8 year old son came along.

They also closed off the street beside the beach for a dance floor.  They had a sound system set up with DJ music.  We left shortly after eating, but could “enjoy” the music from our boat until after midnight.

We had a new experience in Governor’s Harbor.  Shortly after we anchored, a drone came flying out to our boat and hovered over it.  Dave noticed it, waved at it to leave, and it left.  He checked the shoreline and thought he saw a guy controlling it from behind the door of a van.  That was pretty strange.  You really feel vulnerable.  Are they checking out what you have on your boat that they can steal?  If we weren’t on the boat, would they check to see if it was locked?  Something people should be aware of. 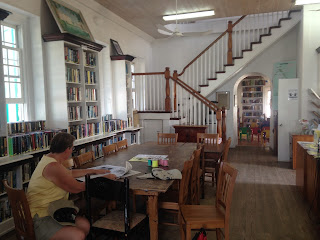 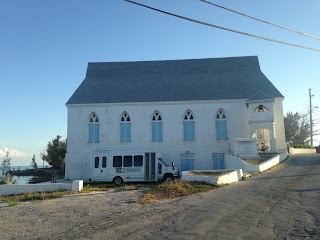 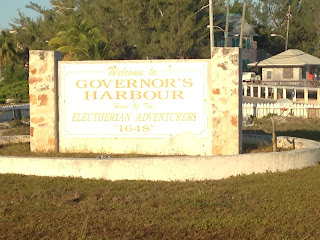 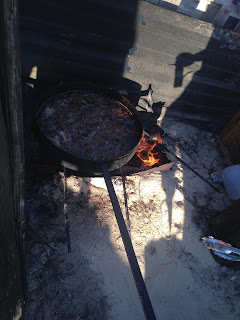 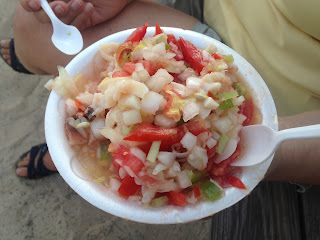 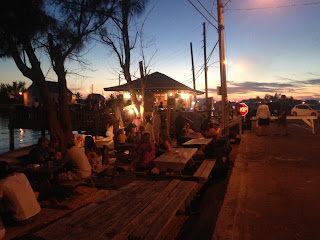 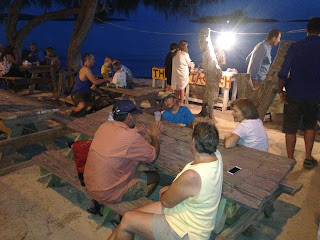