This morning we took our dinghy around the north end of the island to hike to the Columbus Monument on Cape Santa Maria.  There were beautiful white cliffs along the north shore.  Past the cliffs, we had to dinghy into a lagoon to a beach.  It was a little rough going into the bay.  We had Joe on the bow watching for coral and rocks.  Plus there were ocean waves breaking right at the entrance.

After beaching the dinghy, it was a short hike to the monument.  Columbus landed on Long Island October 17, 1492.  There was a beautiful 360 degree view off shore and of the island.
Check out this video
Columbus Monument on Long Island, Bahamas 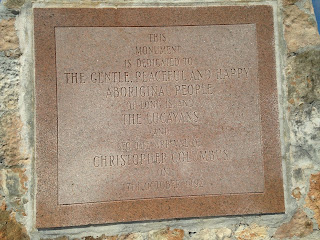 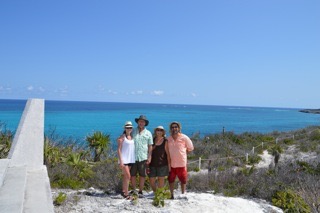 On our way back to the dinghy, we saw what I though was a fossil in the rocks at the beach.  I had seen them in the Abacos.  We asked a family about them and they told us they were actually alive and were a crustacean.  So Dave took a knife and cut around the edge of one.  Sure enough, there was a pink meat on the inside.  The people told us that the locals put them in salad similar to conch salad.  But you have to dig up quite a few of them to make it worth while.   Very interesting.
dinghy ride back onto the ocean click for video

We made it back in time to put on dry clothes and take the dingy to the Sunset Restaurant.  We were the only customers they were expecting.  Rodney visited with us at our table.  He used to be a school principal, but retired and opened this restaurant.  He also rents kayaks, is a barber, writes music and plays the guitar, fishing guide, photographer, and is a local Justice of the Peace.  Here that is similar to a notary public.  He said he is enjoying trying new things in his retirement. 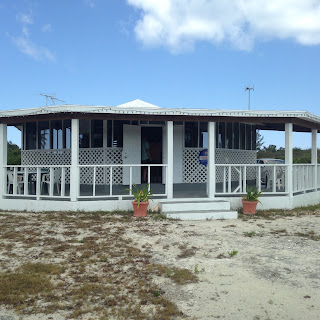 The lunch was fantastic.  His conch salad had a nice spice to it.  The grouper was steamed with a “gravy” of sautéed peppers and onions.  The lobster tails were grilled and also very good.  He doesn’t fry anything at his restaurant.  He served the fish with peas and rice, broccoli and corn on the cob.

We showed him a picture of the crustacean we found in the rocks.  He also said they were used in salad.  Or a couple could be added to conch salad just for the color.  I wanted to know what they were called.  He thought the locals called them “curbs”, but he gave me about 5 different spellings as I was trying to google it.  Finally, I just went through a few photos of crustaceans and found that they are chitin.   We may have to try them sometime.

After lunch we walked into the town of Seymours.  There really wasn’t much more than some houses along the road.  We saw goats and chickens in the yards.  Then we found some coconuts along the road.  We decided to pick a few to drink the coconut water.  Dave worked pretty hard at cutting one open for us. 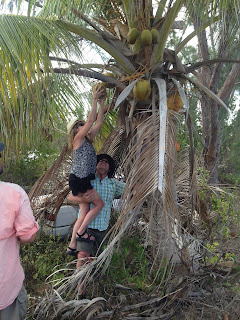 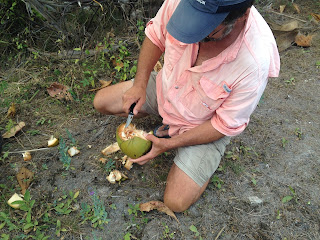 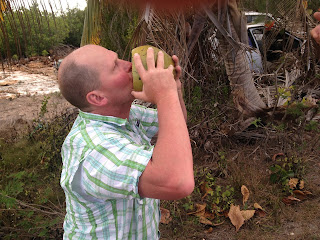 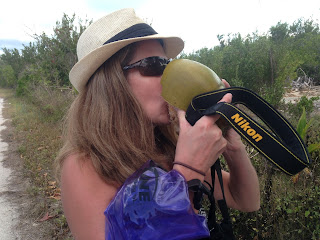 It was after 3:00 by the time we were heading back to the boat.  As we passed the Cape Santa Maria resort, I asked for a show of hands for who wanted to go to their happy hour that was from 3-6:00.  Joe, Erin and I raised our hands.  I’m sure Dave wanted to, but his hand was on the tiller.  We look a left and beached the dingy at the resort.  This was a beautiful resort with bungalows to rent and condos for sale. 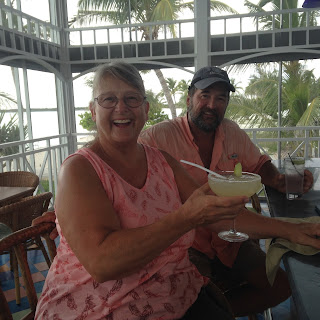 We met a lot of friendly people.  There was a couple from Sweden about 30 with a little boy less than a year old staying at the resort.  We spent a lot of time visiting with some other cruisers.  We ended up ordering some appetizers and staying way past the happy hour.  What a fun day.  Back at the boat, Erin and I went to bed.  Joe and Dave were just visiting.  Then we heard a dinghy approaching and a lady singing “yoo hoo!”.  3 people we had met in the bar came by our boat when they saw the lights on.  So I got up and shared my home made kahlua with them.  These people had to be close to 70 and were leaving for Georgetown in the morning.  I’m not sure we would be able to keep up with them.

Posted by svluckofafool at 1:29 PM