This morning I made biscuits using Cheryl’s technique and they turned out awesome.  We had leftover sausage gravy for them.

Dave went outside to work on the port lazerette.  We have a “wet locker” in the stern swim platform.  It is pretty much useless because seawater is able to enter it.  Anything in there gets scummy.  The previous jugs of products would get so creepy that Dave didn’t even want to touch them.  Eeeuw!  Today, he decided to put all the jugs of vinegar we have on board in ziplock bags and store them in there.  He figured he could throw away the bag if it gets gross.  We have lots of vinegar on board as general purpose cleaner.  We used to clean the heads with it, but over time have found that it distorts all the rubber parts in the Jabsco twist and lock toilets.  So now we are using Dawn Platinum in the heads.  It seemed like we were replacing parts every 3 months.  Seems to be working much better over the last 6 months. 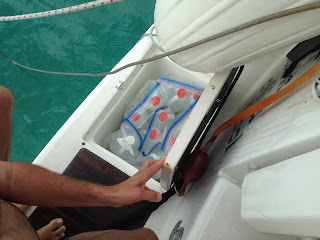 After removing the vinegar jugs from the port lazerette, he was able to clean it and organize it better.  He had found something else that had spilled.  So he put everything that was a liquid in plastic bags.  That probably should have happened right away.  He also learned that you can’t just store things and forget about them.  You need to check on them periodically to see if they have spilled or evaporated.  Live and learn. 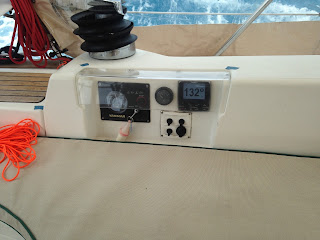 I helped Cheryl pull out all of her belongings to sort through them.  She had planned to live aboard Ricardo’s boat indefinitely.  So she had more with her than someone on vacation.  I helped her determine what clothes to keep with her.  Then she had to go through all her personal belongings and hygiene products.  We came up with 3 packages to mail back to the US.  They could only be 22 pounds each to go through the mail.  Other shipping options were much more expensive.  We ended up wrapping things in heavy contractor bags and using packing tape to wrap and seal them. 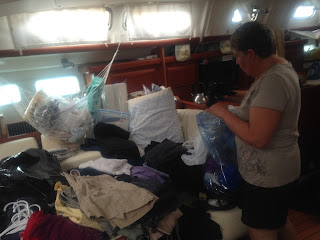 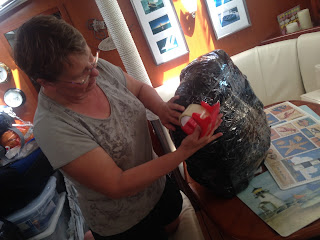 About 3:00, we headed in to the post office.  We each carried a package.  There was a mission on the way to the post office, so she gave them a lot of personal hygiene products.  They were very appreciative.  I wish I had taken a picture of the scale they used for weighing the packages.  It had a circular face and only went up to 22 pounds.  It had a flat surface to set the packages on and it was totally rusted.  We were using our regular body weight scale on the boat and were pretty close on all of the weights.  We met Dulan outside of the Post Office.  He told us all about the Homecoming festival.  He also taught Cheryl how to Junkanoo dance.  Funny guy! 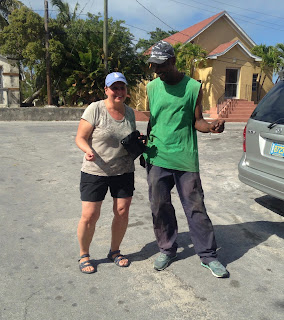 Today was the beginning of the Rock Sound Homecoming Festival.  It is like an all school reunion, but it goes for 5 days!  Today they had booths set up with food venders.  Dave treated this like going to the fair.  He wanted to try everything.  We had BBQ rib dinners on rice with 2 sides.  Then he tried 2 different desserts.  One was a coconut cake, but it was flat like a cookie and crispy like peanut brittle.  It was pretty sweet.  He also bought a local dish called guava duff.  It was like a bread pudding with a creamy rum guava sauce.  He bought one to share with us and went back for another one for himself.  Cheryl and I headed to the liquor store and picked up a couple beers.  They were setting up a stage for bands.  And there were booths with games for children, too. 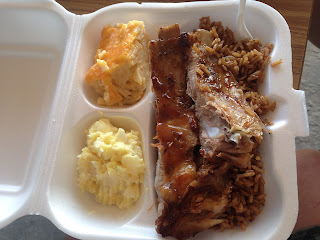 Back at the dinghy, we decided to go for a ride in the harbor and check out the shoreline.  There was supposed to be another dinghy landing further north.  Cheryl and I opened our beers and had our personal sunset booze cruise. 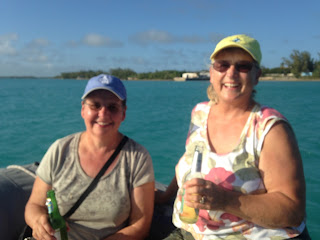 Posted by svluckofafool at 3:30 PM