Pete leaves today out of Boston, but not until 7:00pm.  We had a relaxing morning with breakfast on the boat.  Then we drove into Boston.

We spent some time walking on the Freedom Trail and saw Paul Revere’s house and the Old North Church.  These are both located in the Italian district of Boston.  We walked past a restaurant and had to turn back.  The waiters looked SO Italian that it looked like a fun place.  We googled Strega’s after we ordered wine and a meat and cheese plate.  It said “Strega is famous for its dramatic decor, celebrity clientele, unmatched hospitality, and most of all, the unforgettable Italian cuisine.  It’s also notorious for being one of the most difficult restaurants in Boston in which to get a seat, and has been hailed as having “Boston’s Most Coveted Table Reservation.””  I guess we hit it at a good time.  Our waiter, Carlo, was ver attentive.  Dave told him he wanted meatballs and spaghetti.  He said “I am going to have them make you something my mother would make”.  It ended up being a meatball, a sausage and a beef roll over spaghetti with a marinara sauce.  Pete had the sea bass and gnocchi.  I had the fettuccine with scallops and shrimp in a marinara sauce.  Then we had to share a cannoli and a tiramisu with cappuccino coffee.  We enjoyed a good part of the day eating and watching people walk by.  OK, and we enjoyed the bottle of wine.  Carlo gave Dave his card when we left.  It had a website for their 6 properties and links for reservations, gift cards and planning events.  OK, we’ve never received one of these before, but maybe we don’t frequent the restaurants that routinely hand them out.

We continued our walk circling back towards the car.  We passed Faneuil Hall, now mostly a market place.  But it was a public meeting hall where the Sugar Act was signed which stated “no taxation without representation”.  We enjoyed walking along the piers and looking at boats.  We found one yacht that had a sailboat on its deck.  That was a first.

We picked up Pete’s luggage and sent him on the subway to the airport.  We were back at the boat before his flight left Boston.  We had a great time spending the week with Pete.  We don’t get to see him often enough. 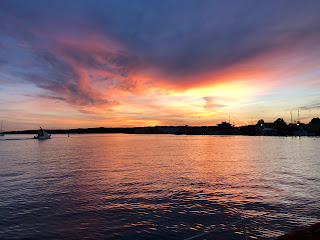 Posted by svluckofafool at 7:57 PM