We had a lazy morning and didn’t leave for Gloucester until 11:00.  By about 11:30, we were free of most of the lobster pots and put up the sails.  When we shut off the engine, we put the prop in reverse then back in neutral to lay the blades in a position with less drag.  Today, the engine didn’t want to go back into neutral.  Dave went below to try to move the prop by hand.  It worked and then wouldn’t work.  He decided to check the transmission oil.  As he was doing this, the plastic dip stick broke.  It threads into the opening and the stick broke away from the threads with just a gentle turn of the stick.  Now it is sitting there snug, but not threaded in.  He decided he did need to add transmission oil.  It had been awhile, so he needed to check on which fluid to add.  He couldn’t get wifi to work.  He dug out the book to check.  When he found the right transmission oil, he now had to add it to a smaller opening because of the broken threads inside the opening.   He ended up spilling it with the motion of the boat.  He used his trusty fuel diapers to clean up most of it while under way and with some rough seas.  Dave has since researched this dip stick set up.  It seems to have broken for other people, too.  He is going to look into getting a metal one to replace it.

About 2:00, we brought the sails back in because we had to turn into the wind to round Cape Ann peninsula.  Just as we finished that, the bilge alarm went off.  Dave went below to check.  The bilge pumps weren’t running.  He decided that the sensor got went with some water and the motion of the boat, but not enough that the bilge pumps had to remove it.  What a day!!

We set up a mooring ball reservation with Dockwa.  Seems a lot of marinas are using that app now.  We were on the mooring ball by 4:30.  There didn’t seem to be as many lobster pots in the way this time.  Later the dock master told Dave that he occasionally has to tell the lobster men to move their pots and leave a path for boats in and out of the harbor.  And the gear shift worked fine.

The Enterprise car rental is open until 6:00 here.  So we headed in to get a car right away.  We drove to Salem, MA to go to an Irish Pub.  They were having an Irish session that evening from 6-9:00.  An Irish session is where musicians sit in an area of the bar and have a casual music session.  It’s not as formal as a band on stage.  Sometimes anyone can join them and sometimes it is just the original group.  Pete had the feeling he shouldn’t interrupt them, which was too bad.  I think everyone would have loved hearing him sing.  But I am partial.  Salem was a busy place with several witch references.  They are probably gearing up for Halloween.  We had a great dinner and a few beers.  Dave, our DD, enjoyed his chocolate milk. 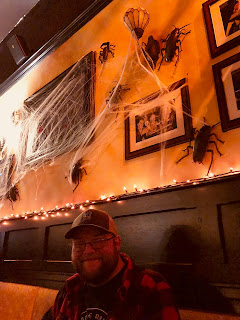 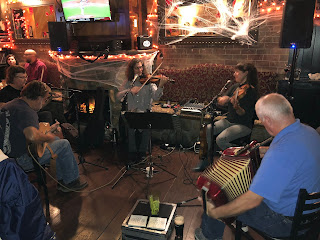 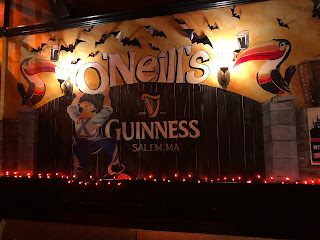 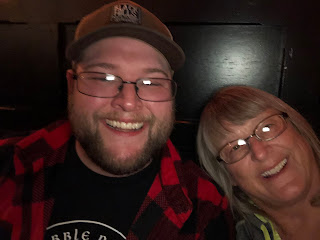 Posted by svluckofafool at 5:42 PM