Dave spent a good part of the morning researching the dinghy we had just bought.  Different sites online were picturing different things.  When I asked him if he would cancel the order, and he said no, I told him something he taught me years ago “you only worry to the extent that you have control over the situation.”

The dinghy was holding air pretty good this morning.  But it wasn’t pressurized to the max.  We moved the Pudgy, Skadoosh, to the deck.  Dave took another look at the Lehr motor because water wasn’t shooting out of the exhaust like it should.  He tried to clean the hole with a wire, then moved it to our dinghy.  It wouldn’t start, and Dave noticed it was out of propane.  He put on a new can and could hear it leak.  It started running, was shooting water out of the exhaust, so he shut if off.  That’s when he noticed the leak was from the pressure regulator for the fuel line.  It actually froze the metal connector, because propane will chill metal.  The leak was at a spot that couldn’t be tightened.  He stopped working on it until he could research the “Lehr Headaches”.  He thinks the connector may be part of a whole line that would have to be replaced.  We love having the Lehr motor as a backup.  It’s light, uses propane, so no gas worries when storing, the company gives good service and backs them up.  BUT, you have to go through them for parts.  They are outside of the US, but not as common as Mercury dealers. So the hunt is on.  Dave thinks we may have to go back to something more toxic to Mother Earth. 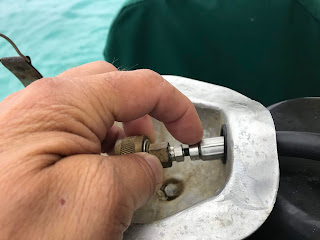 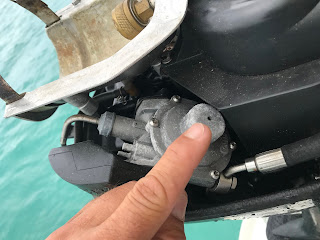 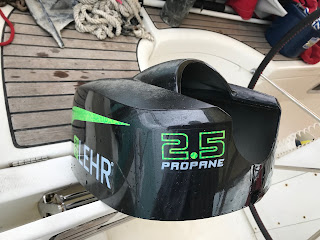 I spent most of the day cleaning the galley and heads.  We will have company join us after we haul out the boat, so I better get ready for them now.  We made water and made sure everything was ready to put the boat on the hard
Posted by svluckofafool at 5:02 AM