After breakfast, Dave went out to work on the dinghy again.  After a short time, I heard him in the cockpit on the phone asking about dinghies for sale to someone.  Come to find out, he found even bigger slits in the dinghy, not just holes.  He was talking to a company in Nassau that has dinghies on hand that could ship one to Spanish Wells.  After talking through the pros and cons and what we were looking for in a dinghy, he called them back and narrowed it down to 2.  Of course it would be cheaper in the US, but that pickles us for the rest of the season in the Bahamas.  The Portland Pudgy can be used for short, slow trips to shore.  It is also geared to be our lifeboat.  And we play with it as a small sailboat.  But, it won’t go distances, especially with 4 people.  It’s like living with only a motorcycle when you are used to having your car.  So here we go.  We ordered Zodiac Cadet RIB 330UL ALU and it will be here Thursday, April 11.  RIB stands for rigid inflatable boat.  It has an aluminum bottom.

I spent some time on the computer today.  We had to send some documents to the credit card company related to the accident we had with the Enterprise rental car.  Enterprise finally sent us the bill.  It as just over $500, so we were happy about that.  That was also sent off to the credit card company.  They will let us know if they will pay Enterprise or if we should and then be reimbursed.  Hasn’t been too much of a hassle so far.  We are just so thankful that nobody was hurt when we were rear ended.

Dave changed the impeller on the Lehr outboard yesterday.  We may just need it on the Portland Pudgy.  Today, when he tested the Lehr motor on “Skadoosh”, the Pudgy, it was stuck in gear.  He had to take apart the motor again and have it in neutral when he put it back together.  Then it worked.  So we hopped in the dinghy with the 3 cold beers we had on board and went for a “Dinghy drift”.  We motored out in front of the boat, shut off the motor and drifted back to the boat.  It is always so peaceful. While we were peacefully drifting, Dave said “We’re illegal right now.  If we put a motor on the Pudgy, it has to be registered and pay to license it.  Plus we don’t have life jackets.  Thank goodness for countries without laws.”  Of course we were only in 7 feet of water. 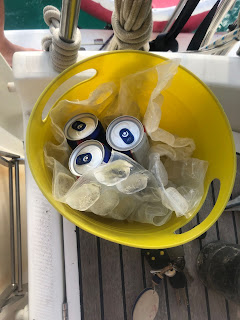 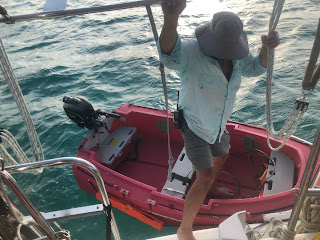 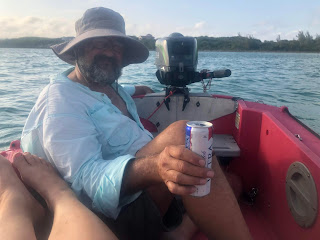 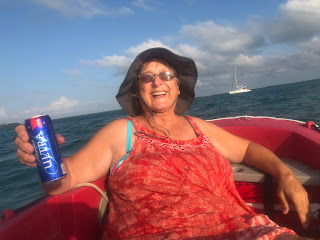 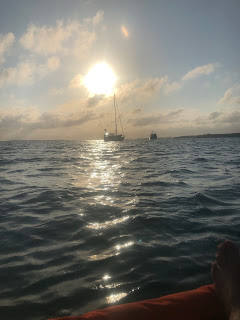 We found out this morning that a close friend of ours for over 40 years passed away this morning.  Randy and Deb Louchart lived in SD when we met them in the late 70’s.  They moved to Atlanta later.  We were able to see them, at least yearly, when we moved south and onto the boat.  Randy was only 63 years old.  Living on a sailboat makes it harder to be with family and friends at times like this.  But it also confirms that we are doing the right thing, living our dream before it’s too late.  Love to everyone of you reading this post.

Posted by svluckofafool at 4:56 AM