Today we sailed on the north side of Spanish Wells/St George Island.  There is a drop off from 60 feet to over 4000 feet.  We were sailing, so we didn’t follow it perfectly.  At least that’s our excuse for not catching any fish.

Anne-Marie had a great time as captain of the boat.  We watched a squall approach and were in it by the time we entered the east entrance to Spanish Wells, which we have never taken before.  The channel starts by going through rocks, then making 3 90 degree turns to follow the channel.  The channel is dredged, but there rest of the area is very shallow or rocky.  We used our Navionics chart plotter and our hand held Garmin for navigation.  The Garmin actually had a better route charted all the way through. 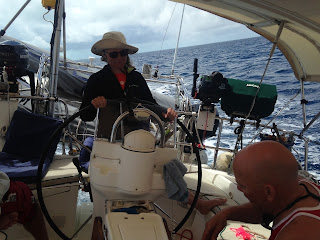 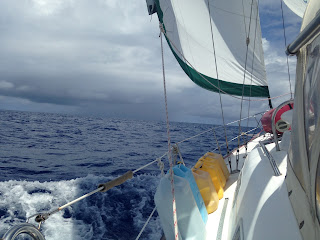 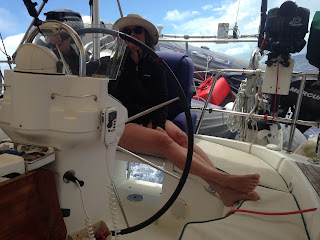 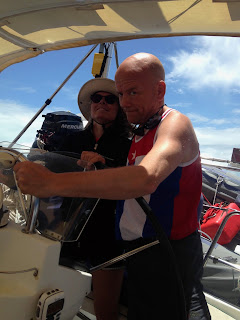 Once we were through the channel, we wanted to pick up a mooring ball.  We had talked to the owner, Bandit, by radio and they recommended #4 or 5.  We didn’t know what their numbering system was, so we just grabbed the easiest one for us to pick up.  With the wind blowing, we rounded the mooring ball a couple times.  In the middle of everything, we got a call on the VHF.  I thought it might be someone telling us not to take that ball.  I had Anne-Marie take over the helm while I talked to another boat in the mooring field.  He explained to me that the pendant that we had to grab was tied to a white milk jug that was submerged.  That was then tied to the mooring ball.  That helped.  We finally were successful with our second boat hook.  Yes, we lost one in the process. 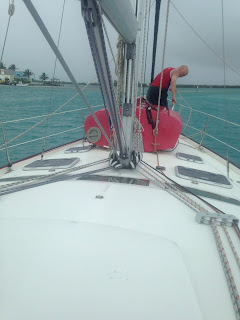 By the time we finished, we were all soaking wet.  We cleaned up and had dinner on the boat.

Posted by svluckofafool at 11:42 AM