We didn’t have any groceries in the cottage, so we went to Eagles Landing for breakfast.  They also enjoyed the breakfast sandwiches made with Johnny Cake.  After breakfast, we went to the grocery store to stock up on some things for breakfast the next couple days.  Some cheese and crackers, etc would take care of us.

On Easter Sunday, a man named Avery gave us a ride to the dock and told us to call him anytime for a ride or a tour of the island.  So we decided to give him a call.  He was more than happy to give us a tour and met us at the grocery store.

We spent a couple hours on Russel Island showing us different developments, beaches, fruit trees, etc.  We met his brother, Crazy Roy, who gave us a couple sapodillas from his tree.   Bev and Kaye had never tried them before.  They are a local fruit that are real sugary and grainy like a pear.  They tried it on their toast in the next morning.  We asked him where we could buy lobster.  Ronald’s seafood market is the only place with a license to sell them now that the lobster season is over.  But he said there were plenty of other places to find them.  When we asked for more details, he said he would find us some.  Avery had a doctor’s appointment at 1:30 and we didn’t even see much of Spanish Wells.  So he said we could call him again tomorrow.

We headed to the beach for the afternoon.  We got smart and packed beverages to take with us this time.

After showering, we wanted to go out for dinner.  We stopped at the Shipyard for their happy hour.  We headed to the bar on the deck by the water.  There were 2 couples at the bar.  One couple had Sturgis Rally t-shirts on.  We used to live 20 miles from Sturgis, so we had to strike up a conversation.  They were originally from Casper, Wyoming but live in Pennsylvania now.  The other couple said we were stalking them.  We had been at Buddha’s and the grocery store at the same time.  Well, this is a little island.

We looked over the menu and decided to stay for dinner.  I just remember the lobster being $40 and thought the place was pricey.  But the rest of the menu was decent.  The food was excellent and nice sized portions.

After dinner, we drove to the western end of the island to see the sunset.  Beautiful evening. 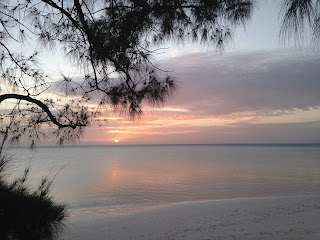 Posted by svluckofafool at 2:45 PM