May 10, 2017 snorkel/squid then passage to north Eleuthera

Before returning to Spanish Wells area, Chris and I did some snorkeling from the boat.  I took Chris by the hand and led him to the rocky shoreline.  He was very comfortable snorkeling with a “guide”.  He could even see the coral and fish when we reached the shoreline. 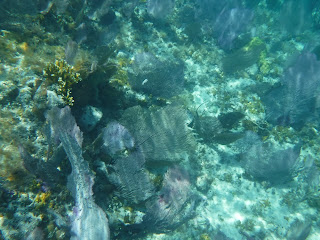 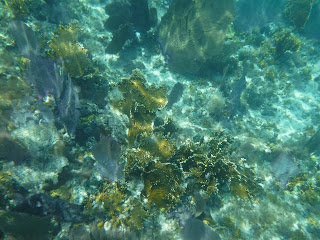 Back at the boat, I saw 3 squid near our snubber for our anchor chain.  Pretty cool. The snubber takes the stress off of the chain when at anchor. 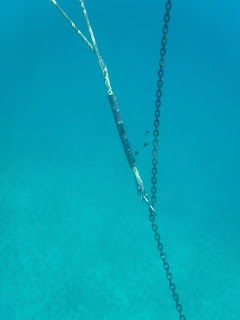 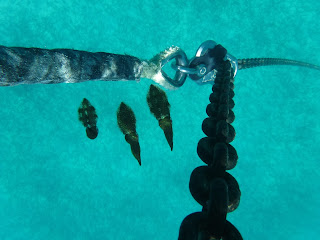 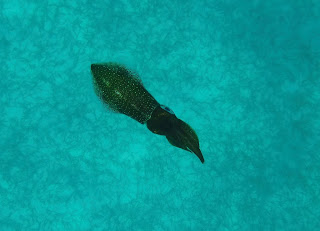 
When we returned, we anchored on the west side of Egg Island, thinking we would be protected from the east wind.  Chris, Silvia and I prepared to take the dinghy to shore.  We could tell there was a surge rocking the boat, so Dave said he would move the boat to the east side for the night.  The wind was light enough to not be an issue.  We could just dinghy to the boat when we were finished at the beach.

We had been talking by radio to another boat that was anchored in the area when we arrived.   After we went to shore and Dave left, he called Dave on the VHF again.  He said he was confused.  Wasn’t that his crew that just went to shore?  Was he trying to escape from us?  After talking a while longer, the other boater said he wished they weren’t leaving in the morning.  He thinks he would like to get to know us better.  So we took down the name of the boat, you just never know.

Dave made water again and started dinner for us.  We had mahi mahi that we had in the freezer with aglio e olio, a garlic pasta.  Chris, Silvia and I played dice again. 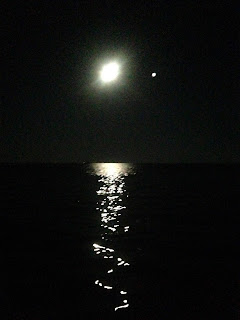 Posted by svluckofafool at 7:33 AM