Sunday
We have been wanting to explore the islands north of Green Turtle in the spring before we return to the US.  When we come through here in the winter, the water is still cold.   We have 2 weeks before we have to be back in Marsh Harbour to meet friends.  So we decided to do a little exploring.  That way, after they leave July 1, we can either return or explore further, or head back to the US.  After all, hurricane season did start June 1.

We anchored at Manjack Cay.  Everyone that has been here really likes this island.  There is no town, so not a lot of traffic by speed boats.  We anchored in a bay that had 2 wrecks along the shore.  I decided to snorkel over to see them from the boat.  Dave’s medication has been making him tired, so he declined to join me. 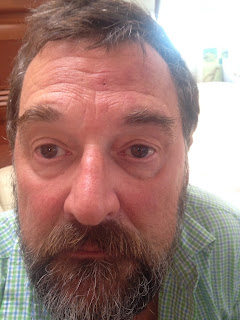 Once in the water, I could tell there was a slight current heading out to sea.  So I angled against it as I swam to shore.  I found one of the wrecks.  There was some fish, but nothing like the wreck off of Egg Island.  The unique thing that I did see was a pair of huge angelfish that were white with black stripes.  Maybe not angelfish, but shaped like them.  I was hesitant to swim further to find the other one.  I didn’t know if it was left or right.  I headed back to the boat just as a dinghy came by to look at the wreck.  I asked them where the second one was.  I would have had to swim quite a ways against the current, so opted not to.  I made it back to the boat just fine, and even checked the anchor before deciding to float off the back of the boat.  The water temperature is perfect this time of year. 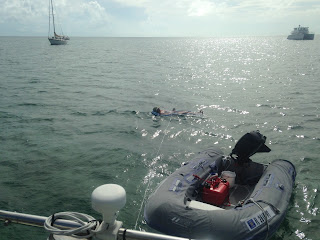 Monday
Today we did some exploring around Manjack Cay.  We think we will bring our guests here in a couple weeks, so we took a dinghy tour and didn’t stop to check things out.  First we went into the rivers in the mangroves.  We didn’t go too far since the tide was going out.  We took the dinghy out onto the ocean side to circumnavigate Crab Cay next to Manjack.  We found a nice beach on the east and the north sides.  We had read in a comment on Active Captain to watch for feral pigs on the north beach.  We didn’t see any come to the shore when we went in closer.

We checked out the other wreck along the shore.  If you look close, you can see a little of each wreck above the water, so it will help to find them in the future.  From the dinghy, it looked like even fewer fish at this wreck.  But it is in shallow water and interesting to check out.

Now we headed north along the Sea of Abaco or west side of the island.  We found another nice bay to anchor in.  And around the north east end of the island, there was a beautiful bay.  There were 3 boats anchored here and 3 power boats on the shore.  I think it would be rough here if the wind was blowing in off the ocean.  From the beach, it looked like there would be some great rocks to snorkel.  Looks like another nice spot to explore when we return.
From our anchorage, you could see a home on the island.  All the Active Captain reviews of this anchorage talked about how cruiser friendly the people were that lived there.  I remember a friend coming here for a big Christmas gathering.  I guess there is a path through their property that is about a mile long and leads to the beach on the ocean side.  May have to check that out later, too.

No need to stay here if we plan to return.  So we moved north to Allens Pensicola Cay.  I guess it used to be 2 cays before a hurricane rearranged things.  There were about 6 boats anchored here when we arrived around 4:00.  I decided to check the anchor and spend happy hour on a float with a couple beers.  We watched 6 more boats into the anchorage that night.  And we were worried about crowding when we came.  The new boats all came from the north west, which means they must have just crossed over from the states.  There’s nothing else in that direction.  I guess lots of people come over in the summer once school is out.

The mosquitoes must have come with them.  Starting to get bad.  Glad we have screens.  We decided to go further north tomorrow and check this place out when we pass here again.  Too many boats and mosquitoes for our liking.