I was up about 1:00 am to relieve Dave.  He said he had only seen one ship all evening.  He hit the bed and I took over.  We had 2 ships pass behind us, not even close enough to be concerned that they may change course and cross paths with us.
About 4:00 am, the wind was becoming very light.  So much that the sails were flopping and not helping us much.  Dave could hear them luffing.  So he go up, helped bring in the sails, and we motored on towards the Gulf Stream.  Then Dave went back to sleep.

I always enjoy seeing the sun come up.  Dave says that always puts him to sleep.  So our rotation works for us.  Dave was up by about 7:00 am and I hit the bed.  I was up again about 10:30 and it was calm enough to cook breakfast.  We were now in the Gulf Steam and were traveling at 10 knots. 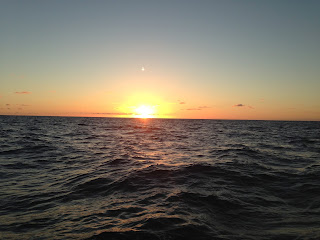 We had a boring day at sea.  Dave likes being at the helm.  So I layed down most of the day and read or napped.  I usually make the meals and clean up.  It was actually calm enough to keep up on dishes.  Sometimes you just have to leave everything until you have anchored.
I heated the casserole about 6:00pm for dinner.  Our propane tank ran out in the middle of warming it in the oven.  So Dave had to change the connections to the other tank while we were under way.  It was about 9:00 by the time I went to sleep tonight.

Happy Anniversary to Janice and Jim, my sister and brother-in-law.

Posted by svluckofafool at 8:44 PM