Monday Dec 26
The Bahamians observe Boxing Day as a holiday.  Not sure if there are any traditions attached to it.

Dave tried to see what would clean the epoxy resin in our cock pit that had leaked and spread to several areas.  It left a brown stain on the fiberglass.  Acetone was better than mineral spirits, but they both sucked.

He also took a battery tester over to Joe on Modaki and we invited them over for dinner.  Yvonne and I made plans over the VHF radio.  She asked if she could bring a salad to have with our spaghetti diner.  So I decided to whip out some fresh bread.  I’m starting to feel a little cocky about my bread making now.  I made one regular loaf.  Then I made braided bread sticks with the other loaf.  They turned out awesome, if I may say so!!

It was a fun evening, again, with Joe and Yvonne.  She brought over some fresh coconut and showed us how she cooks sliced pieces in coconut oil with curry.  Pretty tasty.
Tuesday  Dec 27.
We wanted to move the boat to the southern part of the Abacos today.  Then we will leave for Eleuthera on Wednesday.  We originally planned to sail on the outside of the islands and fish along the way south.  But it was windier than we through it was going to be.   So we followed the Sea of Abaco south to Lynyard Cay.

We anchored along it’s western shore with about a half dozen other boats spread out over about 5 miles.  We kept our distance because we ran our generator for a few hours to make water.  We also changed the filters.  The total dissolved solids are still reading on the high end of the limit.  Dave read that there is a cleaner we can use to flush the membranes which are finer than the filters.  The membranes remove the salt, so they is finer than a dissolved salt crystal and needs a high pressure pump to force the water though it.  That is how the islands make their water, too.  It’s called reverse osmosis.  We will probably do that next year when we get back to the states.  If the water is worse in the meantime, we may have a visitor bring what we need with them on the airplane. 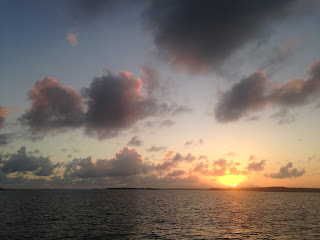 Posted by svluckofafool at 3:06 PM