Sunday
Today we moved the boat to Green Turtle Cay.  It’s 60nm miles, which is about 10 hours if we only go 6k.  Since the wind was on our nose we motored the whole way.  I spent at least an hour of the trip scrubbing our stove top.  Since it was the only thing I was working on, I took the time to remove more than usual from the grating over the burners.  I should have had a before picture so you could appreciate my efforts. 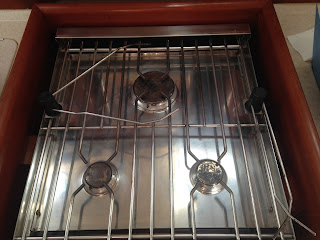 We looked at options of stopping along the way, but decided to continue and anchor in the dark.  We have anchored at Green Turtle Cay 3 or 4 times, so we were ok with that.  We arrived at 8:00pm.  We used the new deck light that Dave installed this summer.  He used a large marine flashlight to look for other boats, but the deck light helped me see him and his hand signals as we anchored.

Monday
We woke up this morning at 5:00 am to the sound of a beating drum and Christmas carolers parading the streets of New Plymouth on Green Turtle Cay.  And it lasted for about 30 minutes.  We weren’t sure if this was the start of the day or the end of a long night for these people.  It didn’t take long for the roosters and dogs to chime in.  We found out later that this is a tradition (held by SOME of the locals).  They do this everyday at 5:00 am for the week before and the week after Christmas.  Now that is dedication.

We brought our folding Dahon bicycles this year.  The first year we were told there weren’t many places to ride bicycles in the Bahamas.  The second year we planned to have several guests and thought they would take up too much room on the boat.  This year, we reorganized and took several things off of the boat to make room for them.

We decided to take the bicycles to shore by dinghy and bike to the southern end of the island.  We have friends there on a mooring ball.  And we want to find some free wifi.  The bikes weigh about 25 lbs each, and are stored in a heavy cloth bag, but they’re not water proof.  Dave got in the dinghy first.  Then I handed him the bikes one at a time, then our back packs with computers.  That was a boat load of expensive cargo.  Luckily it was a calm day. 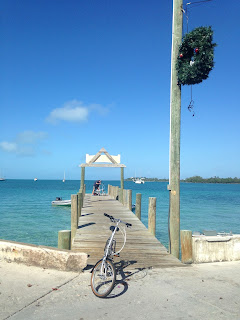 Once we were at the dock, I climbed the ladder onto the dock, then Dave lifted the bikes up to me one at a time.  We took the bags off, stored them on the boat in a black construction trash bag and hoped no one would take them.  Dave had serviced the bikes before leaving the boat.  So we assembled them and took off for the day.

We had never gone more than about 6 blocks to the other end of the town.  They had some fun Christmas decorations about town.  As you leave town, you reach the first of only a couple steep hills on the island, but not bad.  On the hill, some local kids pointed out a “helmet crab”.  It was what we would call a hermit crab inside a shell of a whelk.  And we saw a wild boar rutting in someones yard.  New sights for us. 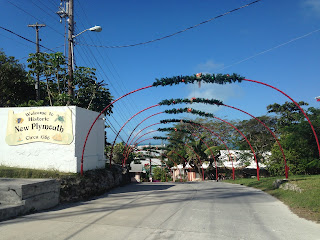 The first half of the trip was on new pavement.  The middle section was under construction, and the last was old pavement prepped to be resurfaced.  So overall, it was pretty good.  We stopped once along the way to pump up a tire and to enjoy the view of the ocean side of the island. 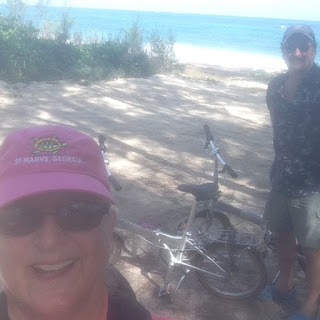 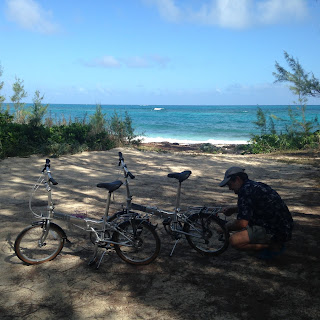 Once we reached White Sound, I mentioned to Dave that the way back should be mostly downhill since we had to climb a few hills to get here.  He reminded me that we started and finished at sea level, so go figure.  The ride took about 45 minutes with stopping.  It felt great.  And we loved seeing more than we had in the past by only walking.

We had a friend whose boat was on a mooring ball in White Sound.  We ran across Suanne Dullard from MN last year in Elbow Cay.  After visiting, we realized we had graduated from UofM Dental School a year apart.  She had left for Christmas, but her daughter and a girlfriend were at the boat.

We found her boat and saw that her dinghy was at the dock of the Green Turtle Cay Marina where we planned to have lunch.  We looked around and didn’t see Kate, so I sent Suanne a message on Facebook.  She answered back that Kate had left to join her for Christmas, and her dinghy was supposed to be in the boat house of the Marina that she was renting the mooring ball from, not sitting at the dock unattended.

We told her we would talk to them and remind them to tuck it away.  After we had lunch, Dave went over to their office.  Brendyl had a dive shop, too.  Dave had an interesting conversation with Brendyl’s wife.  Brendyl wouldn’t be back until 4:00 and she wanted him to come back.  He explained that we wouldn’t be here and he just wanted to leave the message that Sue’s dinghy needed to be moved.  She jumped all over Dave asking him why he moved their dinghy.  Then she wondered why they left it there when the ferry would have picked them up at their boat.  Dave couldn’t get out of there fast enough.  She kept telling Dave that she didn’t know anything about it, which Dave didn’t doubt.  She finally said “why don’t you leave him a note”, which Dave had said earlier.  We let Sue know that we left the note, but if she had left instructions with the wife, we can see where things would have been confused.

We then spent an hour or so in the bar using their wifi.  It has $1 bills tacked up everywhere and boat flags from different sailing clubs.  Real cozy place with wicker furniture.

The ride back took about 30 minutes.  We were back to the boat before sunset without anything getting wet.  We are so excited to have the bikes with us this year.  We can see where we will get more exercise just exploring. 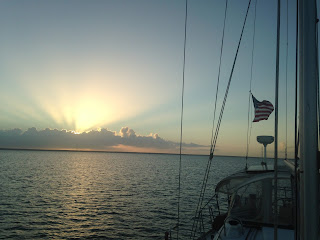