Again, these were worked on through out the summer and  only listed here.

shaft repair and prop clean up
noticed holes in the stainless cover to the stern tube while in Bahamas
removed the sealant on the hull where it connected to see if problem went deeper
mounted a zinc over it for support and keep it from corroding further
ordered a spare cutless bearing and after seeing the new one, decided to replace ours
removed prop to take off cutless bearing, couldn’t remove it, so loosened the shaft from the engine. in doing so, found a busted nipple at the other end, so replaced it.
found some rust inside the prop, cleaned and lubed, concerned about that.  will plan to lube while in the water occasionally.  have to remove two set screws that could easily be lost in the water 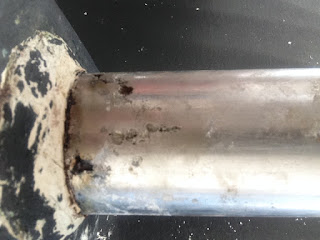 generator
general maintenance replacing oil and coolant and filters
hunted down all melted wiring.  all were in a harness that could be replaced. and the wiring to the fan was replaced. the harness was wired for a different model, so we had to run it to Jacksonville to make changes for our alternator.
replaced alternator and starter and mixing elbow
moved the raw water filter for the generator, much easier access
to run it, we had to use a device like a toilet plunger with a hose attached.  It went up against the hull and ran water through the hose and into the generator (simulating the uptake of water from the sea) 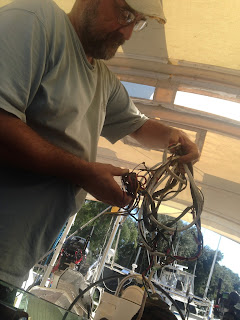 Posted by svluckofafool at 1:31 PM