Tuesday
Yes, we heard the carolers again this morning at 5:00 am.  It seemed easier to go back to sleep because we knew what was going on and about how long it would last.  We headed to Marsh Harbour today.  It is only about 25nm, but the Sea of Abaco is too shallow to get there between the islands.  Boats have to go outside of Whale Cay and back in to move north or south through the Abacos.  It’s always a concern going through the Whale Cut.  If the seas are rough, you can get tossed around and into rocks.  Luckily it has always been a calm day when we have wanted to pass through it.  Or I guess we have waited for the right weather.

Once we were back into the Sea of Abaco, we sailed the last 2 hours to Marsh Harbor.  It is always so peaceful to turn off the motor and strictly sail.  It was actually pretty early when we anchored.  Dave went to shore for fuel and boat parts for fixing the fuel leak.  And he took garbage to shore, yippee.  I am so easily pleased by simple things now that I live on a boat.  He also stopped at another boat that we met last year.  We remembered him because Undaunted knew someone from Rapid City, SD that we knew.  Such a small world.

When he returned, he went to work on the fuel hose.
Wednesday
When we get to a port with a “city” we have several errands to do.  But this time, we have our bikes!!  We made our list and packed our backpacks and bikes into the dingy.  The dinghy dock here always had a group of local boys wanting to help you for a tip.  We decided to bring hard candy for them instead of spending $1-$5 each time we come to shore.

As we were unloading everything we realized we forgot the propane tank that needed refilling.  So Dave scooted back and forth quickly.  First-do we ride our bikes with or against traffic?  The traffic is much heavier here than on Green Turtle Cay.  And remember, they drive on the left side, or “proper side” as the locals say.  We decided we liked seeing the oncoming traffic.

We dropped off the propane, then stopped at the BTC office to ask a few questions about or phone/data package.  Then off to the grocery store.  We only needed some perishable items, like milk, eggs, fruits and vegetables.  It was really strange to walk into the grocery store and hear “Grandma Got Run Over by a Reindeer” over the loud speakers.

Getting back on the bikes with loaded back packs was interesting, but we made it.  Did I say how much I like having our bikes?!!  That walk back to the dock with loaded back packs and in the heat (yes close to 80) was always so long.  Maxwell’s grocery store is the nicest one we have seen in the Bahamas.  You can get just about anything you would in the states, if you want to pay their prices.  So we try to stay with the perishables and bring a lot of provisions from the states.

Back at the dock, we ran into Phillip from the sailboat Sea Ya that we met last year.  He knew we were in the area and were trying to connect.  His wife, Teresa, was back in the states with her family for Christmas.  So we invited him to our boat for dinner.  We had a great evening hearing about their summer here in the Abacos.  Through a chance meeting of “someone who knew someone” in the Bahamas, they have come up with some great house sitting gigs (dog or cat also) in the summer and stayed here year round.  But they worked their butts off for about 4 days before hurricane Matthew taking care of a few  homes, moving furniture inside and boarding up windows.  They were rewarded financially by the people later.  That sounds like something we could do in the future instead of sailing back and forth to the states.

Dave made an awesome clam chowder for dinner.  I made home made buns from my sister Bev’s recipe.  They were great just because they were fresh baked bread, but I haven’t perfected them like Bev makes them.  After Phillip left, I confessed to Dave about the bugs I found in the flour after the buns were in the oven.  I used almost all of a bag of flour that I bought last spring in the Bahamas.  I was going to move the remaining flour into a smaller container when I noticed the small dark spots moving.  Needless to say, the rest of it went in the garbage.  I figured the heat would get those that made it into the dough.  That was a first, and I wasn’t about to throw away those buns.  Boat life! 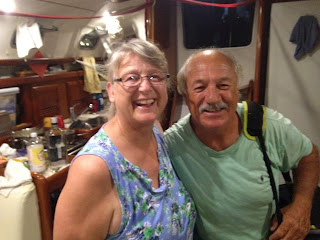 Posted by svluckofafool at 2:35 PM