Sunday:  Now I remember why we haven’t done a night out on the town for awhile.  We had a pretty laid back day and watched Elf, one of our favorite Christmas movies.

Monday:  I went to shore to use the marina’s laundry and wifi.  That’s why you were able to read the update of my blog from this summer.

We discussed our options of ordering the data bus bar and waiting for it to be shipped here or finding one we could drive to and buy.  There was a West Marine store in Jacksonville, FL that had one in stock.  We also have a spare new chart plotter in our storage unit in Brunswick, GA.  We bought it after we had electrical problems 2 years ago and our current one was “acting up”.

We decided to rent a car, get the part we might need, and get our other chart plotter out of our storage unit.  We can always return the West Marine part if it’s not needed.  We figured that would be the fastest way of getting back on the water.

Tuesday:  Enterprise picked us up by 8:30am and we were on the road by 9:00.  We  took a detour through Green Cove Springs to pick up our mail as long as we were this close.  It’s NW of St Augustine and SW of Jacksonville.

The Jacksonville West Marine had the part. Both bags on their shelf had been opened.  So Dave went online and checked to be sure all the parts were there before we left the store. He’s been through this before.

Dave was also looking for an oil gauge for the Yanmar and the attachment necessary to adapt to metric fittings on the engine.  West Marine sent us to a Yanmar dealer within 5 miles for the parts we wanted.  But that location was closed.  Their other store was out in Jacksonville Beach. We happen to be near our favorite chicken wing restaurant, Wild Wings Cafe.  So we had their chicken wing buffet and regrouped.  We decided to make the trip as long as we were this close.

First we stopped at a bike shop close to the restaurant.  We wanted to have spare inner tubes for our collapsable Dahon bicycles.  We took them out of storage and decided to bring them along this year.  We arrived at the marine parts store just as they closed for lunch from 12:00-2:00.  So we drove to a dive shop in Jacksonville Beach for new goggles.  We have been using the same ones we started with in 1994.  We also bought a shorty wet suit for me and a lobster “tickler” to help bring the lobster out from it’s hiding place.  We want to harvest lobster this year.  We returned to the Marine store and they didn’t have what Dave wanted anyway.  Argh!  Lesson: when you are driving several miles for an obscure part, call ahead.

So off to Brunswick.  We hit a few automotive stores, found the oil gauge, but not connections.  We’ll work on that another day.  The trip to the storage unit went pretty fast. We even took a few more things to be stored.  Back at St Augustine, we stopped at a grocery store to pick up a few perishable items.

The city marina is conveniently located to the tourist area of St Augustine.  But that means they don’t provide a parking lot.  All the parking in the area is metered from 8am -5pm.  We arrived about 8:30 and found a spot about a block away.  We walked to the marina to get a dock cart to haul the groceries and packages back to the docks.  That put us back at the boat by 9:00 pm,  That was a long but productive day.

Wednesday:  I got up early to move the car by 8:00 when the meter start again.  On the way back to the car rental, I found an optical shop that was open before 9:00 and replaced the nose pieces on Dave’s glasses.  Something we forgot to do yesterday.  And there wasn’t one within walking distance.  When you don’t own a car, you make a list and try to get everything done while you have wheels.

By the time I returned to the boat,  Dave had corrected the problem with the new chart plotter.  YIPPEE!    Will be able to return the part to West Marine someday, somewhere.  The problem was solved, but the boat needed to be put back together.  So we decided to stay another night and not feel rushed to get off of the mooring ball.

We ran the water maker and generator.  So I spent some more time on the computer cleaning up loose ends of paperwork that we store in the Evernote application.  We showered and went to shore for an early dinner at Meehan’s.  We stopped at the fuel dock to get 5 gallons of diesel with a jerry can.  We prefer that over bringing our boat to the fuel dock.  There was a beautiful sunset that cast a pink light over the water.   Then we were treated to the bridge lights, Christmas lights, and a tour sail boat with lights.  Beautiful last night in St Augustine. 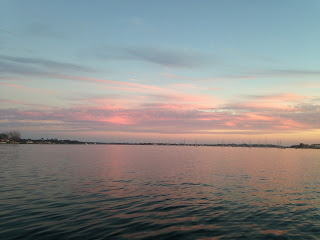 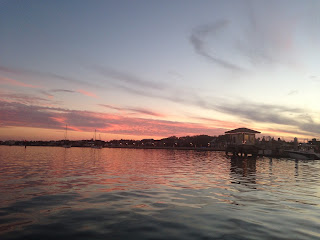 Posted by svluckofafool at 5:47 PM