Saturday Dec 24
First thing this morning, we put a beef roast in our Wonderbag.  It is a quilted bag that cooks like a crock pot with no power source.  Great on the boat.  I also stirred up some bread dough before leaving our anchorage.  Feeling pretty domestic today.

Dave spent the morning working on a pair of glasses.  He stopped at an optometrist office in Marsh Harbor and found the screw he needed, but no one was there that could actually do the repair.  He had to remove a screw that was broken off inside the frame and replace it with the new screw.  Sounds crazy to mention these details, but it just shows you what we take for granted in the states.

By early afternoon, we moved the boat back to Marsh Harbour to make it easier to attend church in the morning.  We couldn’t get the Green Bay football game online, but we checked the score occasionally and cheered just as much when they beat the Vikings.

I spent the day baking pumpkin pie, cinnamon raisin bread, and caramel rolls.  With our small oven, only one pan can go in at a time.  My mother made caramel rolls almost every weekend of her life.  When she would pull them out of the oven on Saturday afternoon, every relative that was home visiting would show up to enjoy them.  I half expected family to show up today. 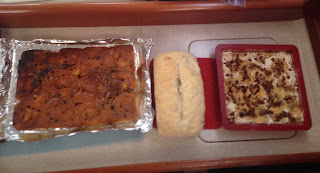 Dave spent the afternoon cleaning up the aft lazarette where he had been working in the fuel line. Just before sunset, we took off in the dinghy to spread some Christmas cheer.  In the Bahamas, a lot of people blow a conch shell at sunset.  We decided to ride through out the harbor on our dinghy ringing jingle bells.  As we circled boats, we yelled Merry Christmas.  One boat asked if we were going to sing carols.  So we sang “I Saw 3 Ships Come Sailing In”. 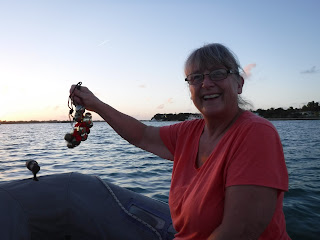 We ended up at Joe and Yvonne’s boat at Mangoes Marina.  They had another Canadian couple visiting them, Charlie and Chris on Wingspread.  They invited us aboard and we visited for about an hour.

Back at our boat, we enjoyed our beef roast with potatoes and carrots AND pumpkin pie.

Sunday Christmas
Dave and I took the dingy to shore this morning to go to mass at the Catholic Church.  I have taken a taxi in the past, but we were told someone from the church drives a bus around town picking up parishioners, and they stop at the Mangoes marina.  Dave had verified this with the dock master at Mangoes earlier this week.

They were supposed to be there at 8:30 for the 9:00 mass.  At 8:40, we decided to find a taxi.  Maybe they weren’t running the bus today.  Just then our Taxi friend, Rinssor, walked around the corner.  He spread his arms and yelled “Mary and Dave!”  He was parked at the next marina, so he got his suburban and gave us a ride to church.  It was fun to visit with him about his daughter in college in North Carolina and what they were cooking for Christmas at their house, turkey and ham.

The mass was great.  I just love how this congregation sings their hearts out.  There is one part of the mass where we generally sing an Alleluia response.  In this church they start and finish with Alleluia but add a couple lines of “Down by the Riverside” and “This Little Light of Mine”.  We heard they had a great candle light mass last night with a Christmas Pageant.  We’ll have to remember that for next year if we are in the area. 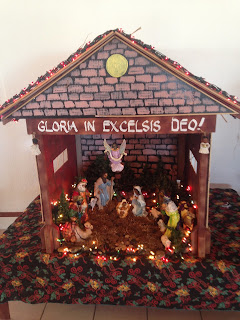 We found the bus after mass and decided to ride it back to the boat.  We waited outside of the bus for a little bit so we could talk to the driver.  But as people came, they said to just get on board.  It was a short school bus, and all the seats were full except one in the back.  OK, it seemed a little funny (hee hee funny) to me to be the only white people on board moving to the back of the bus.  Just saying.  Dave ended up standing in the back with a few other men and some young squirrelly boys.  Most of the people got off at the first stop.  Then he dropped us off and apologized for being late this morning.  But he’s there every Sunday.  Good to know. 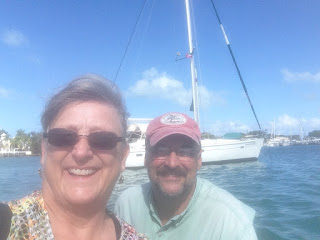 We called Dave’s mom using the app Hangouts on google.  We can call a US phone using our data instead of paying about $1 a minute.  She was at Dave’s sister’s along with his brother.   So we were able to talk to all 3 of them.

Dave actually had a chance to do a little shopping while getting boat parts.  So I received gifts this year.  Actually everything he bought was appropriate for the two of us.   There is a local guy called Barefoot Man that everyone talks about.  So Dave bought a 3 CD collection of his.  And he bought a Christmas CD that had him and 2 other local artists.  The funniest song was called My Hurricane Christmas List.  It talked about all the supplies he needed to repair his home, and he wanted ice.

He also bought some fishing lures.  The pink ones were mine.  How special.  I thought our new dive gear was supposed to be our Christmas present this year.  We really don’t shop now that we are on the boat.  I had to send a photo of Dave playing with his new toys to our great niece and nephew in Aberdeen that LOVE their uncle Dave.

It was a relaxing Christmas.  We hope all of you had a Merry Christmas!
Posted by svluckofafool at 2:59 PM