We woke up early today and were able to listen to Chris Parker’s weather on the Single Side Band radio.  Since we don’t have an internet connection, we don’t have the latest weather forecast.

About 8:30, we left our anchorage and headed to Walker’s Cay.  We were told by Gloria and Mike Peters to anchor outside of their harbor, dinghy in to check in, then return to Grand Cay to anchor for the night.  We met Gloria and Mike in Brunswick last summer.  They have been coming here for years before and after sailing extensively in the Caribbean.  She also gave us directions to make it through the shallow waters between the islands.  We followed her directions along with our chart plotter and had no trouble at all.

Once we anchored, we were getting the dinghy ready to lower into the water when a fishing boat stopped by our boat.  We had our yellow quarantine flag up, so they figured we were planning to check in with customs.  They informed us that the Customs office had been moved to Grand Cay permanently last summer.  They introduced themselves as Danny and Darrell.  If we wanted to see Walkers Cay, we should go to shore and ask for his brother Marvin.  He would give us a tour of the island.  We explained that we can’t go to shore until we check in with Customs.  He said “no worries, this is the Bahamas!”.

We noticed they had lobster and conch in their boat.  I asked if I could take a picture of them.  Then he asked if we wanted to buy some.  They were small with about 6 inch tails.  So he offered us 12 for $20.  We had been planning to snorkel and get them ourselves, but this sounded pretty good.  He made it a baker’s dozen at 13 and we were pretty happy.  Since they were small, he recommended removing the meat from the shell and then cooking it.  He separated the heads and gave us a bag of lobster in a plastic grocery bag.  Love it!!

We were approaching low tide, so we thought we better get back to Grand Cay and not tour Walkers Cay at this time.  We anchored on the south side of Grand Cay.  We heard that the channel between the islands was shallow and had poor holding.

We tried to call the Customs office on the VHF radio, but didn’t get any response.   Even if we had a telephone number, our phones are now inactive in the Bahamas until we can get a Bahamian SIM card.  By the time Dave got the dingy in the water, the Mercury outboard mounted and running smoothly, it was late afternoon.   So we decided to wait and check into customs the next day.

We took a dinghy tour of the area without going to shore.  Grand Cay actually consists of a group of about 5 cays or islands.  The town in on Little Grand Cay, but is just referred to as Grand Cay.  We took the dingy around Little Grand Cay.  There were lots of people on the docks or kids playing in the water or in yards.  It looked like a great little town.
While Dave was working on the dingy, I cleaned the lobster.  Some were easier than others, and I felt like I was wasting some of the meat.  But the overall result was one big pile of lobster meat.  We decided to steam some with crab boil seasoning and sauté some in butter and garlic.  Dave was the chef.  Oh, I put the leftover green beans with almonds and blue cheese in the oven to reheat.

We had a feast and decided we preferred the lobster in butter.  We ate maybe 1/2 of all the lobster.  We are looking forward to having the rest in several dishes over the next week.   We were both a little sorry later that night that we ate that much butter. 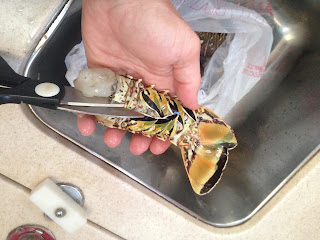 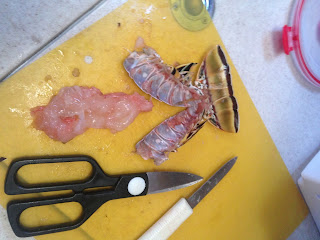 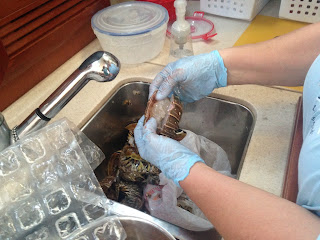