Yippee!  Our canvas work it done.  And it turned out great!  But, as Dave says, I think they work on alien calendars.

OK, here is the canvas work saga.  The existing canvas and framework were custom made for this boat. Last summer, when we were installing our solar panels and attaching them to the framework, we had to make holes through the bimini.  Normally, you can burn a hole through the material.  Well it began to shred.  And we noticed that it was not made for ease of removal for a hurricane.  So we decided to have it replaced.  For non sailors, the bimini shades the cockpit, the area where we sit or stand while sailing the boat, or eating at our table in the cockpit.  The dodger is like a windshield with a roof part to it, too.

Mobile summer 2013- only canvas people were more into awnings.  Decided to wait until we were in Florida.  Called a couple companies in FL-didn’t work out to make plans in advance.

Tampa December 2013-contacted a recommended company.  Made appointment for an estimate and the guy didn’t show.  We were headed on to Ft Myers, so we sent pictures, got an estimate, left a message saying “yes, let’s do it.”  Didn’t hear back for a week.  By then we were setting up other appointments, so I told him I’d get back to him, just to leave HIM on a hook.

January 15-Top Stitch crew were about 45 minutes late, so we called.  The owner didn’t tell the estimates guys about the appointment.  But they came over right away.  We liked them and their ideas, so we decided to go with them no matter what.  We discussed materials and colors at that time.

January 27- owner and stainless steel man came to look at our framework and other options for mounting the solar panels.  We decided against changing the framework.

February 10-they came back to actually take the measurements and start the work (one month after first contacting them-which we expected).  But we hadn’t been given an estimate.  The employee showed us what he was told, but the owner called us the next day with the estimate.  It was actually less than we had expected, so we were glad it was all working out.

The employees used a heavy plastic to actually make a pattern of where the canvas and the windows would be (isinglass that can be rolled up when opened). Interesting process.  Then they take it back to the “shop” and put it on the shelf to be sewn when the projects ahead of it are finished.  Then we waited.

March 3, 2014, no word from them, so we gave them a call.  They said it was scheduled to be done by the 6th.  No word by Friday, the 7th, so I called.  Andy said it would be ready to install Monday or Tuesday.  So I asked if I should call on Monday, yes that would be good.  Called Monday, Andy isn’t working.  When I tell them that he said to call to set up on appointment for Monday or Tuesday, the lady on the phone said “well it looks like it will be Tuesday”.  Here phone skills needed some improvement for representing the company.

March 12-installed dodger.
March 17- brought the bimini to be fitted and then a pattern was made for the piece that will connect the dodger and bimini.  We had to take our solar panels off for this part AND store them inside the boat.

March 24-the bimini and the connector piece were installed.  Solar panels go back on.  Now the framework was in a different place since the material was tighter.  So Dave had to drill 2 new holes into the frame of each solar panel to be able to mount them again.  My dad always said “measure twice, cut once”.

March 28- side curtains delivered.  They can be zipped on and off to block wind, rain, or waves.  Our stern has a walk through transom, so we didn’t make a rear curtain.  We may figure a way to do that in the future.  They put grommets in the free ends to help hold them to the framework.  Each side was missing one grommet, so they will arrange to have those 2 added “easily”.

Can you believe how long you have to wait?  Other sailors say that this was not unusual.  My friend, Cheryl, can sew and she likes to scuba dive.  She should move here and start her own canvas company.
When I have more pictures of the side curtains, I will add them. 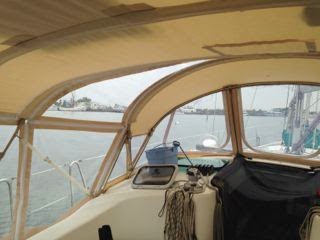 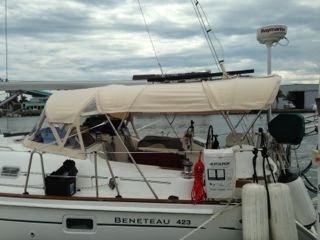 Posted by svluckofafool at 11:14 AM