We didn’t accomplish much on Wednesday.  The late night was a little hard on all of us.  We enjoyed the facilities at the marina and meals at local restaurants.

But today, Thursday, we wanted to start making our way towards Marathon.  We would have had to leave early to make it there in one day.  And we knew there were going to be some strong winds.  So we found a place 15 miles, or about 4 hours from Key West where we could anchor for the night.

We left the marina at 11:00am.  There were 2 larger boats beside us.  And just today, a catamaran parked along the channel across from us that we had to go through to leave.  They are much wider than a mono hull.  With the wind blowing, we knew it would be a tight maneuver to get out of our slip.  Dean and I were on the bow, and a couple other people came out of their boats to help push us off when we were too close to their boats.  The wind kept hitting our bow and Dave had a hard time turning the boat.  But we made it without any scratches on anybody’s boat.

We traveled around the west end of Key West and to the south of the Keys to head east.  There were 2 cruise ships docked at Key West.  You really feel small sailing by them.

We were in 15+ knot winds.  The wind was from the east, so it was on our nose.  That meant we rocked like a hobby horse for 3 hours.  That also meant we had to motor instead of sail.  Our bow was washed thoroughly.  BUT no one got sea sick.

We pulled into Saddlebunch channel and anchored just off the channel near an island of mangroves.  We found this anchorage on our Active Captain application on our phones.  Other people that have anchored here, give us their reviews and suggestions.  It was a little hairy at times, because of how shallow it was.  We touched bottom twice.  But we were anchored by 2:00pm.

We pulled out the snorkel gear and hit the water.  This was our first snorkel adventure since we have been living on the boat.  We dove the anchor.  It was only in about 7 feet of water.  So it was fun to check that out.  We missed a 4 ft diameter coral head by about a foot.  The water was cloudy, but if you dove down to the bottom, you could see a few fish.  I saw a lobster close to our boat.  And Dean saw a turtle near our boat before we entered the water.

After our swim, we had guacamole as an appetizer.  Then Dave made his famous shrimp boil (minus the corn).  We didn’t keep large pots on the boat, so the corn wouldn’t have fit, anyway.

After cleaning up, we watched the sun set in a cool breeze.  Dave put out a crab trap, but no luck.  We’re going to leave it until morning.  We made it to cruiser’s midnight-9:00, and hit the bed early.  A full day in the sun and fresh air can wear you out.  And we have to leave at high tide in the morning, so we won’t hit bottom on the way out of the channel. 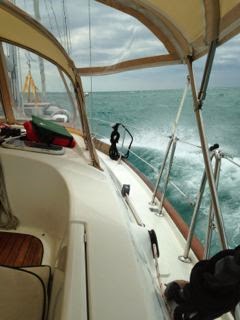 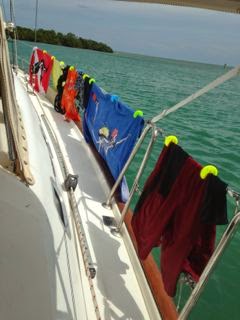 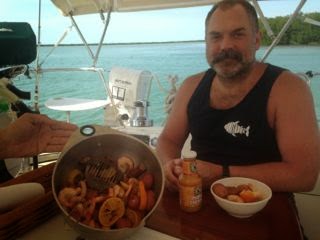 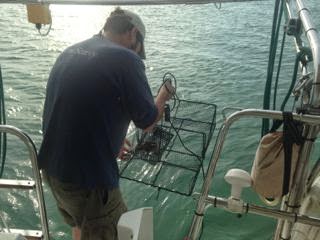