Happy Birthday, Dean!  We started out the day with breakfast at Pepe’s.  This is something I have always wanted to do.  But usually we stay where our breakfast is included, or we are so far away from there, that it’s hard to get there for breakfast.  It was only about 3 blocks from our boat.  Pepe’s in over 100 years old and is probably the oldest restaurant on the island.  I had a mimosa with fresh squeezed orange juice.  Their home made bread of the day was key lime.  It was a sweet bread with lime zest, awesome.  Breakfast was great.  They are open for lunch and dinner.  But I had always heard about their breakfasts.

We had started our laundry before breakfast, so Dave headed back after eating to check on it.  Dean and I went to the new West Marine store that was between Pepe’s and our marina.  Didn’t find what I wanted.  So I went back to relieve Dave from the laundry.  Dean went exploring/shopping.  My priorities sure have changed.  In my younger years,  after having mimosas with breakfast, I would have gone bar hopping afterwards.  But instead, I was doing laundry.  But the best part is that it was air conditioned and FREE.

Dean and I went for a swim.  The pool was nicely warm.  The lounging chairs were all taken.  And if you sit at the tables with umbrellas, there is a $50 minimum order required.  So, we swam and headed to the showers afterwards.   Again, Dave was doing some project on the boat, but didn’t need any help.

I had heard from some other sailors about a guy that sings at the Bull Bar on Duvall Street in the afternoons that was entertaining.  I found out he was singing today, but not tomorrow.  So Dean and I headed there about 3:30 and heard him for an hour, Yankee Jack.  The walls have murals of different people who made Key West famous.   He sang a song called “On the Walls of the Bull”.  He has a youtube video of the song and sometimes the lips in the murals move and sing along.

By 5:00, Dave was done with his projects and wanted to meet us at an Irish Pub near our marina, Finnegan’s Wake.  We had been there once before with Pete.  And now the wind and rain were hitting us.

We settled in, ordered beers and their Irish whiskey special of the day, Tillamore Dew.  We decided to eat dinner there.  Dave had the Irish breakfast that they serve all day.  Dean had the Shepherd’s Pie.  And I had the pot roast.  Mmmm, Mmmm.

Yankee Jack from the Bull showed up for their trivia night.  Dean does trivia at a bar in Minneapolis.  He asked us to join his team.  His other team mates drive mopeds and didn't show since it was raining.  It was fun, but we didn’t win any prizes.

The evening turned into quite the celebration.  Dave walked me back to the boat before the guys were ready to return.  Is that another sign of old age? 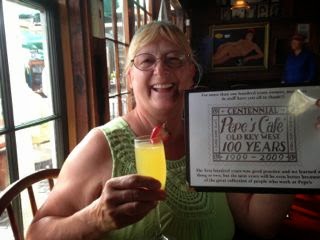 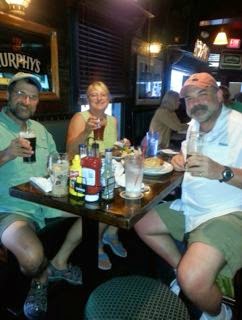 Posted by svluckofafool at 12:37 PM