Tuesday:  At 9:00, we listened to the Cruiser’s Net on the VHF radio.   Dave had an extra spotlight that he wanted to get rid of.  Afterwards, a man came to our boat to pick it up.  He told us about his boat.  It is an historic tall ship.  He takes it to different shows and wins money in competitions.  He pays crew $200-250 per day when moving the boat.  The boat is called La Rena and was built in 1877.  He has documentation and photos of the Kennedy’s and Winston Churchill on the boat and all the log books.  Interesting stories.  I haven’t been able to find a site on the web about it, but will share that if I do in the future.

We had to return the car by noon, so we took advantage of it and ran a few errands.  We dropped Dave off at Home Depot.  Pete and I went to K-Mart to find him swim trunks and some more summer clothes.  We also went to the grocery store.  Nice to pick up fresh produce and meats when we can.

We took all of our purchases back to the boat and stored the perishable items.  Then we hopped in the dinghy for a tour of Boot Key Harbor.  We ended up at Castaways, a restaurant we had heard about from other sailors.  We sat outside and had a couple beers, some peel and eat shrimp 6 for $2 and their menu looked too interesting to pass up.  Dave and Pete had hogfish dinners and I had a shrimp, scallop and fish seafood enchilada with poblano sauce that was amazing.

We returned to the boat, hung out, ate leftovers and played some cards.  Pete is into playing Skipbo now.  Our game was buried under some cushions in the salon, so we played Malice,  which isSkipbo  with regular decks of cards.  I have played this game since high school with my girlfriends.  Then later with my mom and sisters, and some friends over the years.  Dave doesn’t care to play, so I was in heaven. 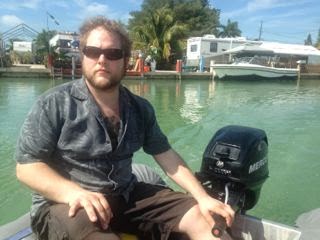 Posted by svluckofafool at 12:29 PM