We are finally leaving Ft Myers Beach after about 3 months.  We had discussed going directly to the Dry Tortugas from Ft Myers Beach (70 miles west of Key West).  But the weather was not in our favor.  Monday night through Wednesday were going to be pretty windy.  We would have made it there, but then we would have had to just bob around in our boat for a couple days.  So we decided to go straight to Key West across the Gulf of Mexico.  It was about 145 miles.  And we go between 5 & 6 knots, so we thought it would take us 24 hours.

Saturday morning, we prepared the boat for the passage.  We took the dinghy motor off of the dinghy and placed it on a motor mount on our stern.  We took all our life jackets, etc, out of the dinghy and we hung it on the davits (hangs sideways off the back of the boat).  We stored anything that could fall off of a table or counter when the boat heels.  Then we “dogged the hatches” (locked the windows closed) and closed all the through hulls.  Every sink, shower drain, and toilet have fittings to close the pipes.  That keeps water from coming into the boat.  So anytime you use the head or the kitchen sink while you are under way, you have to open and close them.  I cut up meat and cheese and cantaloupe for ease of eating while underway.  And we all had our “comfort foods” to snack on.  We didn’t plan to cook anything while under way.  Dean had not been out on the open water.  And I was sick on our last passage.  So we were going to eat light.

We left the mooring ball at 12:25pm.  We went to the DYS Marina to get fuel and water and pump out our heads.  So it was 1:15 when we left Ft Myers Beach.  We enjoyed our stay here, but were both ready to move on.

It was a beautiful day with only 1-2 foot swells.  We set a course for Key West and used the autopilot.  The biggest concern was dodging the crab pots.  They are marked with a floating ball about the size of a soccer ball.  Most are white, many are black, but we saw a few red or orange ones, too.  At 3:00 we started taking our 2 our watch rotations.  Dean went first.  Since we were all awake anyway, it gave us a chance to show him what he needed to do.  He caught on right away and it was great to have 3 people in the watch rotation.  That way you had 4 hours off before your next shift.  We did 3 hour shifts before, but you do get sleepy towards the end.  We figured there were more obstacles here to watch for, so 2 hours would keep us fresh.

It was a beautiful starry night.  I made sure to drink plenty of water.  And I didn’t eat anything spicy.  When I did eat, I ate outside.  Dave and I even decided to sleep outside in the cockpit (as best you can).  I think all these things helped avoid sea sickness.

About 7:00pm we saw the Ft Myers to Key West ferry.  So we decided to move our path to match theirs.  We figured there must not be any crab pots in her route.  Wrong, we still saw them and had to dodge them, though they were getting fewer and farther between.  The sun set about 7:40 and you can’t see them any longer.  We would occasionally see them once we passed them.  We just decided if the prop catches one, we’ll put the motor into neutral and deal with it.  Which means Dave would have to go overboard to untangle the prop.  And hopefully there wouldn’t be any permanent damage.  We didn't have any problems.

Before my 5:00 am shift, the wind was picking up.  It has been about 8 knots up until now.  And it was closer to 10-12 knots now.  So I brought out some of the side windows to block the wind on the port side and closed the windows in the dodger.  That helped.  Dean is always so quick to offer help with things, but he seemed pre occupied with the radar.  I thought he was just checking out the different functions.  So when I finished the windows and went to take over for him, I realized he was handling the boat manually and trying to avoid some ship wrecks.  I guess he had said that to me earlier, but I didn’t hear him with the wind blowing.  There is a boat symbol on the radar to show the position of our boat.  It doesn’t change size when you zoom in our out.  So to Dean, it looked like we were right over the wrecks.  They are charted, but you don’t know what it is.  So it’s best not to go over them.  I thought I heard Dave say that he picked a course that looked like we would avoid the wrecks.  So I zoomed in and it was much easier for Dean then to see how much space we really had.  We were impressed that he handled it so well when he really hadn’t had to steer this boat before.  When I took over, I was all over the place trying to get us back on track.  I finally had to just put on the autopilot heading south parallel to our track and eventually got us back on our track by tweaking the autopilot 10 degrees at a time.

By now the winds had picked up to 15 knots with some 17 knot gusts.  We still had our main sail out, so we were getting closer to 7 knots.  We weren’t in a hurry to get to Key West, so I backed off the engine to save fuel and still went about 6 knots.  The swells were 4-6 feet now.  Dean was trying to sleep in his berth.  He has a double berth, but we had totes stored on part of his bed.  So his bed is comparable to a single bed in a straight in slot.  He ended up bouncing off the wall and totes and didn’t get  much sleep.   BUT, he didn’t get sick!  About 6:00 am, I was able to see the red light at the harbor of Key West even though it was about 15 miles away.   There wasn’t much boat traffic all night.

Dave’s shift started at 7:00am, but I stayed up to watch the sunrise shortly after 7:00.  I had some great pre dawn and sunrise pictures.  I ended up staying up with Dave.  It was so beautiful and peaceful sitting together on the boat.  About 8:00 I could see land!  Dave’s shift should have ended at 9:00, but we were getting close to Key West.  He continued so he could bring the boat into Key West.  It’s best to have everyone help to keep an eye on traffic and channel markers.  You could see a cruise ship docked on the north side of Key West from a long ways off.  It was so much taller than the surrounding trees and buildings.

We used our Active Captain application to find a good place to anchor for the night.  The time from entering the northwest channel inlet to setting the anchor was about 90 minutes. Entire trip took 22 hours.  We anchored on the north side of Key West and on the east side of Fleming Island.  We were on the west side of Salt Pond Key near Sigsbee Park, which looked like a trailer park.

We opened the hatches and through hulls, had a bowl of cereal and went to bed.  Around 4:00 or 5:00pm, we finally had our shrimp ceviche and a couple cocktails.  It was great.  I think letting it sit a couple days really improved the flavors.  We called it a night early because we still felt like we needed to catch up on our sleep. 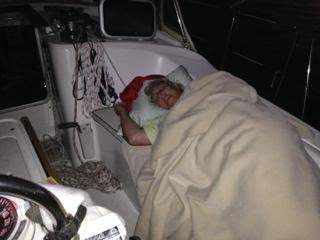 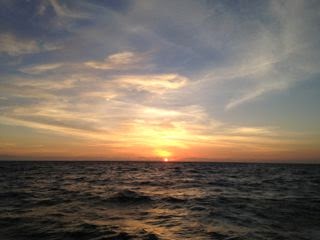 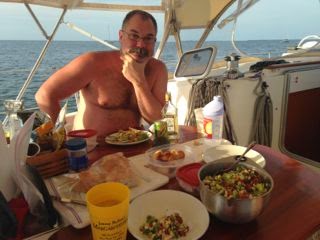 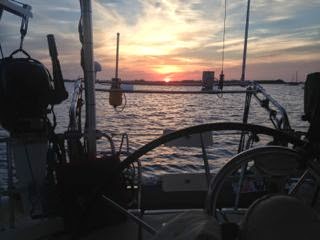 Posted by svluckofafool at 12:23 PM