The never ending story of the water maker is finally finished.  It all began back in the fall of 2013.  IF we were to place a water maker on our boat, Dave wanted to research which one would  be the best for our boat.  His main criteria were ease of use, maintenance involved, filters that can be bought at local hardware stores, modular-meaning it didn't have to be installed all in one place.  He found one made by sailors who are engineers, so they knew what worked well in a boat and were great at answering questions.  It's called Cruise RO for reverse osmosis.

We decided on the system while we were still in Mobile, but we didn’t order it until after January 1 and had it sent to the Killion’s house in Cape Coral.  It arrived in 4 boxes by late January.  I was in South Dakota at the time, so Dave tore apart the boat to decide where to put all the parts.  He thought he was going to have to put the  controls near the floor under our dinette table.  But he talked to the company about it and the said they could send longer hoses (we would need 2 different ones).

There are 2 low pressure filters to remove debris, 2 controls, 2 high pressure filters to removes salt, and several hoses.  The  hoses are color coded.  Green-not drinkable yet or raw water, red-high saline content and will go overboard, blue is drinkable.  The water can be tested before it goes into our tank for contaminants.  The EPA standard is under 500.  But we want it closer to 200 or less.

We placed the controls in our galley.  That way we will be able to test water over our sink.  There is a pickling solution to use if you will be leaving your boat for awhile and won't be using the system.  You use a 5 gallon bucket to mix solution and run it through the system.  So we thought being near the sink in the galley would make that easier.

Early February, Dave started cutting holes in the wall in the galley, into the engine compartment, for the control panel.  I may have said this before, but it’s always scary when you have to cut holes into your boat.  Al least these were internal.  I watched from the other side to be sure he didn’t puncture anything.

Under our starboard settee, we have a panel that had our fresh water tank pressure pumps and valves and 2 bilge pumps.  Dave moved them to make space for the water maker-low pressure DC pump and high pressure AC large pump (this heats up, so it needed to have air access for the fan).  Then he had to cut new hoses for the things he moved, because now they were farther from their source.  And he had to run DC and AC power from the port side of the boat through the bilge to the starboard side.

Then he had to wait for new, longer hoses.  On Friday, Feb 21 one hose arrived at the Killions.  The other was delayed because of bad weather up north.  Boy, what an inconvenience that snow up north was for us :)  On February 27, he ran the new green hose.  He had to take up floor boards to connect the hose, and then realized that they sent the wrong size-3/8 inch instead on 1/2.  So Dave had to call the company and ask them to send a different hose.  They were going to rush this hose and and check on the status of the other hose we were still waiting for.

We didn’t get the hoses until we saw the Killions again on March 21.  The canvas work was done on March 24, so we could leave.  But Dave’s brother decided to meet us here, so this gave Dave more time to finish the water maker while we were still here.  So Dave had to tear the boat apart again to run the hoses.  On April 1, he finally tried it for the first time.  He had to chase down a few leaks.

After the leaks were contained, he ran it and it was pulling fresh water out of our tank instead of sea water.  He got back to it on Thursday while Dean and I went shopping.  He worked through several scenarios with calling back and forth to the company.  On Friday, I had to pick up some more parts for him.  He had to remove the panel and take a picture of the valving assembly to send to the company.  While he was waiting for them to return a call, he took apart the valving assembly panel and figured out the problem himself.  Our panel was put together wrong.  By mid afternoon Friday, we had water! 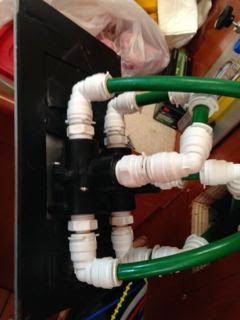 Posted by svluckofafool at 12:11 PM