We decided to go out for breakfast this morning at the Stuffed Pig, just across the highway.  They have a patio out back that we sat on today.  Pete and Dave had the usual combination breakfasts with pancakes or waffles.  I had an omelet with crab, bacon, spinach, mushrooms and feta cheese and brought half of it home.

Dave needed some things from West Marine, so he walked there after breakfast, about a mile away.  Pete and I went back to the boat to load up things to take to the marina.  We wanted to spend some time on the internet.  We had some things to print, scan and e-mail.  We also decided to update our computers.  So we loaded up Pete’s laptop, our laptop, our Apple Macbook, our mini iPad, portable printer and portable scanner, all the appropriate cords and our phones into two back packs (only one was water proof).  Then we decided we might as well do some laundry while we were there, so packed up 3 loads.  We had to get a dock cart to take everything to the marina from our dinghy.

We spent the afternoon getting caught up on lots of things.  We do take the wifi for granted.  Dave had been talking to several Verizon people about options for a traveling hot spot for us.  Other servers seem to have options, but Verizon hasn’t been too helpful.   One guy told Dave just to go to a McDonalds or another public place to get the wifi.  This was after Dave explained that we live on a boat and plan to go to foreign countries.  So if anybody has any suggestions, we would appreciate it.

There were 3 manatees in our dingy dock today!!  I finally got to see my first manatee.  They really are just ugly blobs that lazily float around.  There was a mother about 6 feet long and 2 babies about 3 feet long.

We were done with our computers about 4:30.  We took everything back to the boat and just unloaded, let Pete change into clean clothes and we headed for Happy Hour.  There is a restaurant across the highway that we have been to for lunch and dinner.  And we heard they had a great happy hour.  Florida Keys Steak and Lobster had a happy hour from 2-6pm with $1.50 domestic draft beers and $2.00 foreign drafts.  So we had a few Guinness beers for $2 a pint.  They also had $5 appetizers.  We had some chicken wings, peel and eat shrimp and Dave and Pete each ordered sushi off of their dinner menu.  Lots of fun sharing again.  Someone told Pete he was a professional happy hourist.

After leaving there, we took a dinghy ride out Sister Creek to Sombrero Beach, on the south ocean side of Marathon.  We went out in the open water to circle and island just to open up the dinghy motor for awhile.  There was a home on the island with windows on all sides and hammocks on two sides.  Looked pretty nice.

When we returned to the Bay, we decided to go to Dockside, a bar in the bay.  They had live music tonight.  The band was good and played a lot of 70’s music, which we all enjoyed.  Pete was raised on that.  We had to have their famous Hog Handles appetizer.  It is 3 hunks of pork each on a rib that have been smoked.  I think Dave said its back meat.  We also tried their specialty of home made potato chips with bacon and bleu cheese with bleu cheese dressing.  They were pretty good,too.  We stayed until the band quit at 10:00.  We have to get up early Saturday for company. 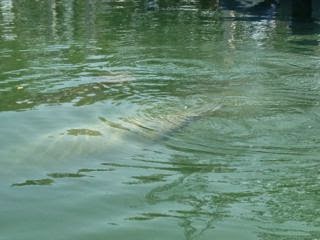 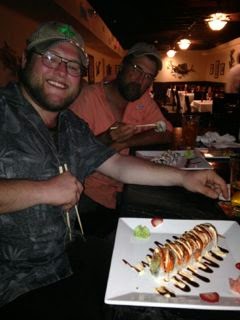 Posted by svluckofafool at 1:26 PM