Today we took the bicycles into Spanish Wells.  We wanted to pick up a few more groceries and check out the island.   First we rode to the east end of the island.  It was only about 6 blocks beyond where we had lunch yesterday.  At the end of the island, there is a restaurant with a gorgeous view.  It was too early for lunch, so we parked the bikes and went out on a gazebo to stare at the water for awhile.  Glad we never get tired of that.
There was an older couple there that we visited with.  They were from England, but had a winter home in Spanish Wells.  They have been coming here for many years.  They were curious about our sailing experiences and amazed that we no longer had a home, only the boat.  We saw a freighter out on the water.  They mentioned that their groceries were on that boat.  It’s the mail boat that comes once a week with supplies for the grocery store and anything else that is shipped there.  We mentioned we were going to the grocery store today.  Should we be worried that the shelves would be empty.  They said not to worry.

Then we headed west on the main road that runs though the town about 30 blocks.  We stopped at another grocery store I had seen on the map.  The guide books also said there was a laundromat here.  Inside the store, I found out that they were closing at the end of the week.  Not enough business.  The shelves were pretty bare, trying to just sell things out.

She explained that there was one washing machine and one dryer behind the store.  She even walked me out there to show me.  It was there for the apartments above, but it is open to the public.  You buy tokens from her and then can go there anytime you want.  Not sure what will happen after the store closes.  Anyway, each token was $6, so $12/load to wash and dry.  I decided I could just do it on the boat by hand for that amount.

Back on the bikes, we checked out a beach access for the north side of the island.  We rode past the grocery store because we wanted to check out the rest of the island and have lunch before we loaded up with groceries.

At the west end of the island, there was a park.  So we stopped for awhile enjoyed watching a little girl dance on the stage for her mother. 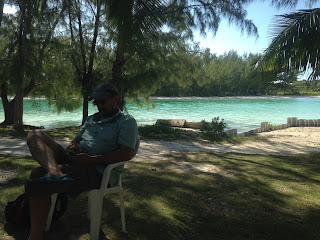 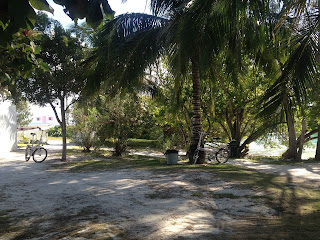 We had lunch at the Yacht Haven Marina restaurant, Wreckers.  It was kind of pricey.  I don’t think we’ll go back.  Dave had a gyro sandwich with fries.  I had a panini sandwich with a salad.  We only had water to drink, and it came to $40.  Since they had good wifi, we sat and used it for awhile.  I used an app called Hangouts and was able to call my sister, Bev, using their wifi.  I was glad she answered her phone, because it was my Bahamian phone number that came up.  That was a fun surprise for her.

It was about 1:00 by the time we headed to the grocery store.  Guess what!  They close at noon on Wednesdays to stock shelves after the mailboat arrives.  Now wouldn’t it have been nice it that couple at the gazebo had told us that?  We didn’t really NEED anything.  But Dave has been wanting to buy chicken wings and make chicken souse, which you often in the Bahamian restaurants (and made with all kinds of other meats or organs).

We stopped back at Pinder’s Supermarket and bought a 3 lb package of frozen chicken wings for about $16.  They also had limes for the souse, so we were set.  It ended up being an expensive day, but we enjoyed the bike ride. 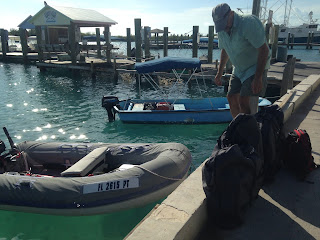