Rich came by this morning to check with us on some weekend plans.  He told us about a restaurant/bar in Gregory Town, about 5 miles north of here, that has a musical jam session on Friday nights.  He and another couple were planning to go and wanted us to join them.

The other couple were going to check into renting a car for 24 hours.  We could split the cost of it to get to Gregory Town and back instead of a taxi or hitch hiking with so many of us.  Then we could use the car to tour the island tomorrow.  Sounded good go me.  Of course, Dave elected not to be a tourist on Saturday.

We spent the day doing some domestic things.  I baked bread and Dave pulled out the Sailrite sewing machine.   We had a list of several little projects and remembered a few not on the list. 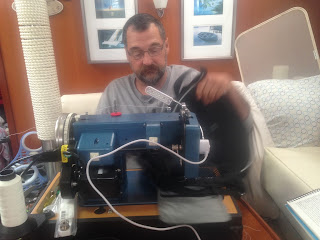 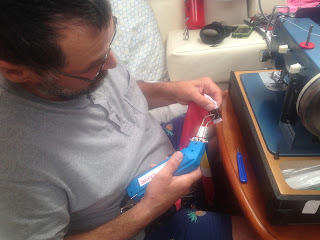 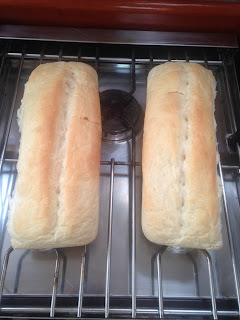 We picked up the others with our dinghy about 5:30 so we’d only have one dinghy on shore.  Rich was on KellyRae, and Heather and Dave were on The Answer My Friend.  From the name, we figured one of them was a musician.  And yes, Dave brought a guitar.  We met William at the dinghy dock and picked up our rental car.  It was a Buick, small SUV and fit all five of us just fine.  Dave (the other one) had no trouble driving on the left side of the road to Gregory Town.  You never know when you get in a car with a stranger.  We arrived at the Sunset Bar (previously Elvina’s) early enough for dinner.  They usually tell you what they have available for main dishes.  Then the dinners come with rice and choice of potato salad or coleslaw.  We had BBQ ribs and jerk chicken.  Dave said they were more like boiled ribs with BBQ sauce.

People started coming in while we were eating.  And there were about a dozen with instruments.  Dave and Heather had been here several years ago and recognized a few people.  We were told that Lenny Kravitz has been known to play here.  So we had to check out what kind of music he played this afternoon.  We recognized one of the songs we googled.  But he didn’t make it tonight.

Most of the time, the music was pretty loud.  But they let Dave play a couple acoustic numbers on his guitar.  We headed back about 10:00pm.  We pulled over or stopped a couple times because of crazy drivers, but made it back just fine.

We were shocked by how low the bill was.  Dave even double checked with them on the items.  Lots of people were buying pints of liquor and mix.  So Dave decided to get a pint of rum. We had 2 dinners, 4 bottles of water, 4 beers and a pint of rum for $47.  That’s what we have paid for lunch in some places.   Great night.
Posted by svluckofafool at 7:35 PM